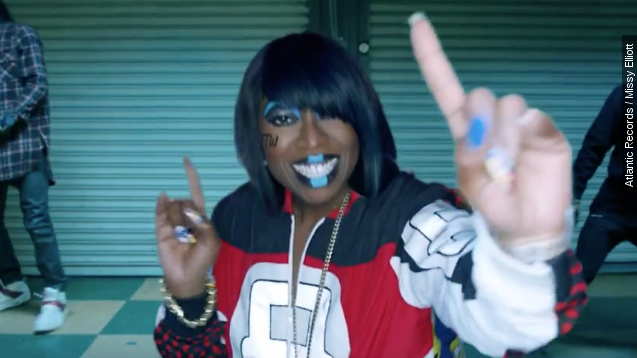 WTF?! Missy Elliott just released the new music video for "WTF (Where They From)."

By now, Elliott has probably gotten ahold of your brain, flipped it and reversed it. Her creative genius shines through in the form of a dancing disco ball supported by a new generation of pint-sized performers.

The video looks familiar to fans of Elliott's past work — "WTF" seemingly signed XOXO, "Gossip Folks" Missy. But despite similarities, "WTF" is her first solo music video in seven years.

And get ready to resurrect your inner freak because according to Pharrell, Elliott's in the studio, and we're all about to get our freak on again.

"Her mind, man. Her mind. The way her mind works, like we're in the studio, and just the things that she says, and thinks about, and her video concepts, like I didn't know all those video concepts were hers. I'm so proud of her. That's Virginia." Pharrell Williams said to Jimmy Fallon.

Elliott also made a coaching cameo with Williams on this season of "The Voice." An emotional Elliott opened up about her passion for music that gives her all the feels.

"When I hear y'all sing, it's with such feeling. And you don't hear that these days," she said on "The Voice."

These days, you hear Katy Perry. Elliott joined the pop superstar in a surprise Super Bowl performance in February. It was then we learned more about why the rap phenom has been absent for so long.

Elliott suffers from Graves' disease and said she had to put her health first, tweeting after her first public performance in several years, "I cried because I've been thru so much but I'm still here & thru the grace of God & u the fans believing in me I love y'all."

The "supa-dupa fly" smash maker hasn't released an album since 2005 but is taking steps to join the social media-driven age. Elliott has finally joined us on Instagram and regularly tweets motivational messages.

So, Ms. Misdemeanor, please unleash your so-good-it-must-be-criminal-sound to us via a seventh studio album. We, the fans, are clearly ready.

This video includes images from Getty Images and music from "celery man" by Birocratic / CC BY ND 3.0