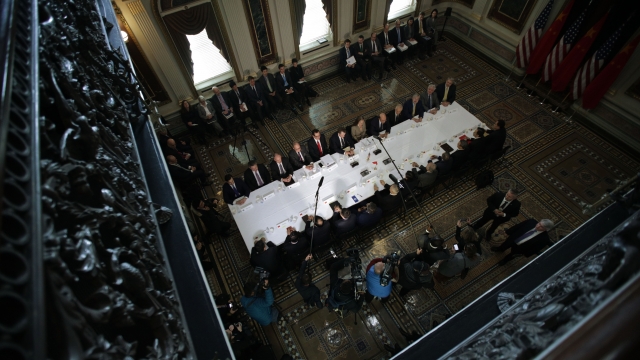 SMS
Wall Street Journal: U.S. And China Have Agreed To Semi-Annual Talks
By LeeAnne Lowry
By LeeAnne Lowry
January 11, 2020
They're similar to meetings started under President George W. Bush, where the countries would meet regularly to discuss a range of topics.
SHOW TRANSCRIPT

The Wall Street Journal reported Saturday that the U.S. and China have agreed to semi-annual talks.

The meetings are set to be officially announced Jan. 15 at a White House ceremony to sign the "phase one" deal with China.

Trade talks will then move into a second round of negotiations, but the semi-annual meetings aren't related. They're similar to meetings started under President George W. Bush where the countries met regularly to discuss a range of topics and work to resolve any disagreements.

Presidents Barack Obama and Donald Trump both continued similar traditions. But the Trump administration had stepped away from the meetings, saying they didn't produce tangible results.

The Journal reports that the new talks, spearheaded by Treasury Secretary Steven Mnuchin, will "represent a way for officials at all levels of the two governments to meet and develop deeper relationships."