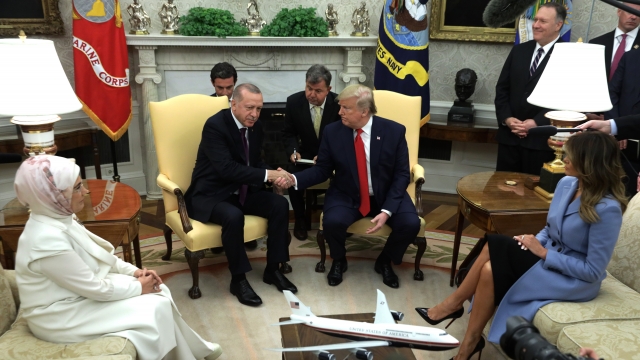 U.S. drone footage is being investigated as evidence of possible war crimes against civilians by Turkish-backed forces in Syria.

The Wall Street Journal broke that news in a report published a day before President Trump hosted Turkish President Recep Tayyip Erdoğan at the White House on Wednesday.

According to the Journal, U.S. military officials reported disturbing surveillance video of killings to commanding officers after Turkey launched its military attack on Kurdish forces in northeast Syria.

The video clips have not been released. The Journal reported they allegedly showed Turkish-backed Arab fighters killing a Kurdish person in a van.

Other drone footage was of fighters swarming two trucks. The Journal says one man appeared to have been shot on the road, though some military officials said the images were unclear.

A Pentagon spokesman told the Journal that U.S. officials referred the footage to the Turkish military for investigation. President Trump's national security adviser, Robert O'Brien, told CBS' "Face the Nation" on Sunday that "some of things we've seen are very disturbing."

"Turkey has assured us that that those are being investigated. We're very concerned about those issues, the war crimes issues. We're watching them. We're monitoring them very closely. There is no place for genocide, for ethnic cleansing for the war crimes in the 21st Century. The U.S. won't stand by for it, and we've made that position very clear to the Turks."

On Oct. 12, other videos widely shared on social media appeared to show separate highway killings. Amnesty International said the dead included a Kurdish politician, Hevrin Khalaf. The organization said she was executed by the Turkish-backed Syrian National Army and that it had compiled "damning evidence" of war crimes.

Before his White House visit, Erdoğan said Turkey takes the issue seriously and will investigate. Turkey is also blaming Kurdish forces for explosions in Syria it has characterized as terrorist attacks.

"It is great honor to have president Erdoğan from Turkey here. We're going to have long and hard discussions. I know that they will be very successful. We've had a great relationship. And we will make it even better."

The Washington Post reports President Trump was poised to renew a $100 billion trade deal with Turkey. That's despite Congress' bipartisan condemnation of Turkey's attack on Kurdish forces, who were critical in the U.S. fight against ISIS.