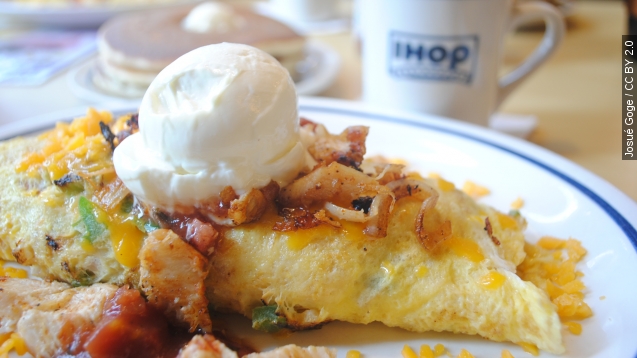 By Christine Slusser
June 3, 2015
The Center for Science in the Public Interest has dished out its "Xtreme Eating 2015" awards, and they aren't pretty ... or healthy.
SHOW TRANSCRIPT

Usually, winning an award is a good thing. (Video via Sony Pictures Releasing / "Talladega Nights: The Ballad of Ricky Bobby")

But there's really no pride in winning the "Xtreme Eating 2015" award from the Center for Science in the Public Interest. To even be considered, meals had to be around the 2,000-calorie range:

"Our winners have what it takes ... a total disregard for the obesity epidemic and the coming diabetes tsunami. Of course, you can't blame restaurants for that. That would be so unfair."

One of the winners came from IHOP: the Chorizo Fiesta Omelette. The omelette alone is 1,300 calories.

However, it also comes with three buttermilk pancakes, which are 410 calories combined. And you know what goes with pancakes?

Syrup. For some of us, lots and lots of syrup.

The entire thing comes to around 1,900 calories. And that's not including a drink.

Another winner, winner chicken dinner ... doesn't actually involve chicken. It's the 16-ounce Herb Roasted Prime Rib from Outback. That has 1,402 calories all by its lonesome.

Throw in a couple of sides and half of that complimentary bread loaf they give you ... and you're looking at about 2,400 calories.

And if you decide to top off dinner with dessert? Don't worry, Cheesecake Factory, you win an award, too.

According to the center, the Cheesecake Factory's Warm Apple Crisp comes in at 1,740 calories. Although we couldn't confirm that number, a Cheesecake Factory employee told us the dessert is 1,000 calories without any ice cream or whipped topping. But it wasn't the worst offender.

According to a video by the center: "This is a create-your-own-combination from Red Lobster. So, we paired french fries with two types of fried shrimp, a shrimp linguine alfredo with a caesar salad and just one cheddar bay biscuit. ... Just for that drink, it's 900 calories. ... The whole meal has 3,600 calories."

"As much as I like eating, we just don't need to do that. That's why we're a nation of Fatty McFatFats, really, for reasons just like that," Gayle King said on CBS.

So, uh ... congratulations to the winners?

To be fair, IHOP, Outback, Red Lobster and Cheesecake Factory all have healthier options on their menus. Some even have entire menu sections devoted to lower-calorie fare.

And with more than one-third of American adults being obese, we probably need all the help we can get.