Would A No-Fly Zone Ever Fly In Syria? 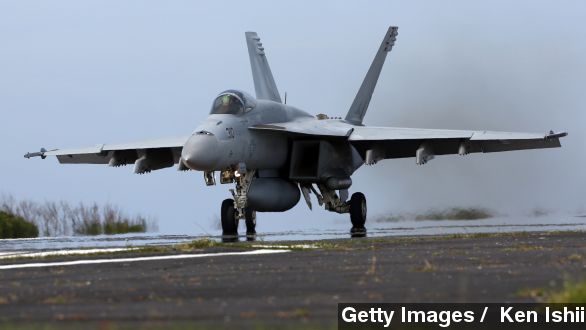 President Obama's long been opposed to setting up a no-fly zone in Syria. Video via The White House)

But it could finally happen, according the The Wall Street Journal and Bloomberg, which are both reporting the U.S. and Turkey are negotiating a type of safe zone along the Syrian border that would be off-limits to Syrian aircraft.

U.S. officials are downplaying, if not flat-out denying, the reports. "Here at the Pentagon, there's no active consideration of the proposal right now," Pentagon spokesman Rear Adm. John Kirby said on Fox News.

The fight against ISIS has renewed talk of some sort of safe area. The thinking is, such a zone could prevent Syrian President Bashar al-Assad's forces from targeting the rebel groups who are also fighting ISIS on the ground. (Video via YouTube / HABRADASHR)

It could look a lot like the no-fly zones the U.S. set up over Iraq in 1991 to protect the Kurds in the north and the Shi’ites in the south from Saddam Hussein's forces. U.S. troops patrolled those skies for about a decade.

Imposing a similar no-fly zone in Syria would be costly — possibly requiring hundreds of U.S. aircraft. (Video via U.S. Department of Defense)

And one might not be that effective when you consider the Assad regime mostly uses surface fire to bomb the opposition.

And there aren’t just logistical challenges to consider but political ones. A lot of experts say creating a no-fly zone would require the U.S. commit to one of two equally undesirable options.

That is, either coordinate to some degree with Syria's brutal dictator or do just the opposite and knock out his Russian-made air defenses. (Video Eretz Zen)

And the last thing the administration wants now is to get drawn into an armed conflict with Syria when it’s already fighting ISIS. (Video via Foukoul Hani Rif)

According to The Wall Street Journal, the U.S. is considering a less formal safe zone that would not require taking out Syrian air defenses.