Worst Team In The NBA Sells For $550M 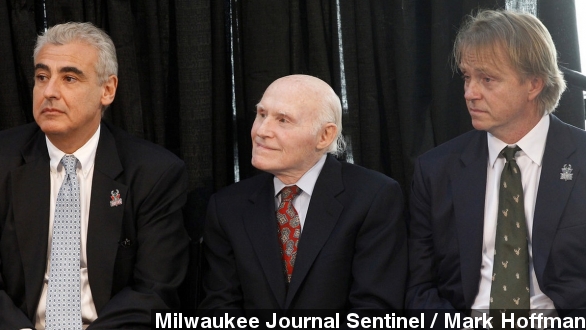 SMS
Worst Team In The NBA Sells For $550M

By Jamal Andress
April 17, 2014
Although it's had a mediocre decade and its record this season is terrible, the Milwaukee Bucks have been sold for $550 million.
SHOW TRANSCRIPT

The Bucks haven't won a playoff series since 2001, and since that season have finished above .500 only four times. But now, new life for the struggling franchise. (Via YouTube / bucksdotcom)

"Today's announcement signals the start of a new, exciting era for the Milwaukee Bucks." (Via NBA)

Despite the terrible record this season and the mediocre decade the team has had, the Milwaukee Bucks have been sold for $550 million.

Which, according to Forbes, is about $145 million more than the team is worth.

"A lot of people shocked by the price tag, considering Milwaukee is considered to be a small market team." ​(Via Al Jazeera)

So why the expensive buyout? Well, as with many pro owners, it may be more heart than head.

The Milwaukee Journal Sentinel says owning an NBA team was a lifelong dream for the two billionaires, and they echoed that sentiment during the press conference.

"It really is a dream come true."

"Marc and I are lifelong basketball fans."

"We couldn't be more excited."

"It's a once-in-a-lifetime opportunity." (Via NBA)

The new owners are Marc Lasry and Wes Eden. Eden is the founder of Fortress Investment Group, a New York City-based private equity firm. Forbes estimated his worth at $1.2 billion. Lasry is the co-founder of Avenue Capitol, a hedge fund investment group. Forbes places his worth at $1.7 billion. (Via Big Think)

One of the big problems the Bucks have, besides winning games, is their stadium, the Bradley Center — it's the third oldest stadium in the NBA, and the league's new commissioner says it's outdated. (Via YouTube / BlimpWorks1)

After a tour of the stadium last year, he told a crowd of Milwaukee Bucks sponsors: "Compared to other modern arenas in the league, this arena is a few hundred thousand square feet too small. ... [It] doesn't have the kinds of amenities we need." (Via Milwaukee Business Journal)

But those problems may soon be in the rearview for Bucks fans. The official Bucks Twitter sent out these messages saying outgoing owner Herb Kohl has pledged $100 million toward the building of the a new stadium and that incoming owners Eden and Lasry matched that with a promise of $100 million combined.

With $200 million raised, the ownership will be well on its way toward a new arena. The Amway Center in Orlando, finished in 2010, cost $480 million to construct. (Via Amway Center)

To be finalized, the sale and purchase still has to be approved by the NBA Board of Governors.