Seventy-two years ago, the USS Indianapolis was hit by Japanese torpedoes and sank beneath the waves, never to be seen again.

Until now, that is. A team led by Microsoft co-founder Paul Allen has found the ship in the Philippine Sea.

The Indianapolis was on its way back from a top-secret mission: Dropping off atomic bomb components that would eventually be used in the attack on Hiroshima.

Of the 1,196 people on board, about 400 died when the ship was hit by the torpedoes. But those that did survive the blast spent five days in shark-filled waters. A passing pilot spotted them by chance, and 316 men were saved. 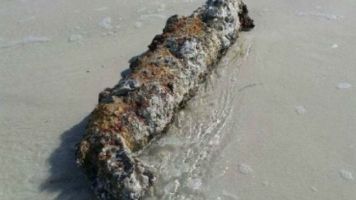 You might recognize that story from a famous scene in the movie "Jaws" when Robert Shaw's character, Quint, is recounting the sinking of the USS Indianapolis.

As Quint tells it: "Eleven-hundred men went into the water. Vessel went down in 12 minutes. Didn't see the first shark for about a half an hour."

Allen seeks out lost artifacts from the Second World War in an attempt to preserve them. In 2015, he discovered the Japanese battleship Musashi.

And last year, new information about the Indianapolis' location helped jump-start his search for the ship. But it was still like finding a needle in a rather large haystack — his team had 600 square miles of ocean to sift through.

The exact location of the Indianapolis is going to be kept a secret. The wreckage is considered a war grave, and by U.S. law shouldn't be disturbed. Twenty-two Indianapolis crew members are still alive today.