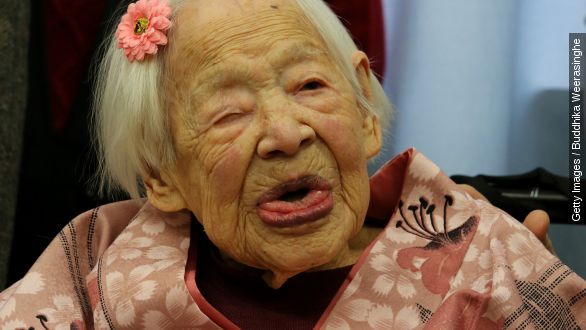 Misao Okawa, who held the record for oldest living person, died early Wednesday. She was 117 years old. Okawa died of heart failure at her nursing home in Osaka, Japan, with her grandson by her side. She is survived by her three children, four grandchildren and six great-grandchildren.

Guinness World Records recognized Okawa as the oldest living person back in 2013. When asked how she managed to live so long, she said jokingly, "I wonder about that too."

Now that Okawa has passed, the title falls to the oldest living American, Gertrude Weaver. Born in 1898, Weaver is 116 years old and lives in Camden, Arkansas.

Time caught up with Weaver back in July and asked her about some of her favorite hobbies, which include manicures, Bible study and wheelchair dancing. She tells Time the secret to a long life isn't a kale diet or exercising twice a day but instead kindness. She says, "Treat people right and be nice to other people the way you want them to be nice to you."

The next two ladies on the list were born within a month of each other: Susannah Jones and Jeralean Talley were both born in the spring of 1899.

"I said, 'I don't want to be sick no long time, suffer no long time.' So far, I don't suffer." Jones lives in a suburb of Detroit with her daughter and grandson. Both Talley and Jones credit serving God with their longevity on Earth. (Video via WXYZ)

And while there aren't too many 115-year-olds running around, the number of centenarians in the U.S. has continued to increase. According to the U.S. Census, there are more than 53,000 Americans who are at least 100 years old. (Video via Voice of America)