Ocean Warming Is Faster, Less Uniform Than We Thought 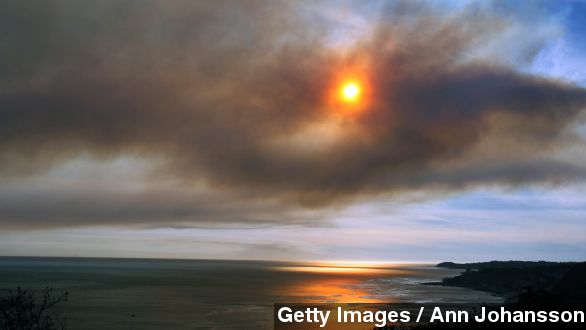 SMS
Ocean Warming Is Faster, Less Uniform Than We Thought

By Sebastian Martinez
October 7, 2014
A new report says the world's oceans are warming at a much quicker rate than previously estimated — what does this mean, practically?
SHOW TRANSCRIPT

Scientists often look to the world's oceans to study how fast the planet's been warming, but new reports show that over the last few decades, they haven't gotten the full picture.

The reports, published in the journal Nature Climate Change, say that estimates of ocean temperatures since 1970 have been too low, because the models for regions with little data were too conservative.

SAM CHAMPION, THE WEATHER CHANNEL: "While the upper portions of the oceans, they continue to absorb heat from global warming, these pictures show that the deeper sections of the ocean have not ... these findings are really just trying to understand the different levels of the ocean."

Those deeper ocean sections are known as the Ocean Abyss, and NASA says despite those deeper waters not warming since 2005, ocean levels are rising, and the findings don't cast doubt on the fact the planet is warming.

DR. WALT MEIER, NASA: "That's simply not true, if you look at just simply the magnitude of the changes we're seeing, in wintertime the Arctic is decreasing twice as fast as what the Antarctic is increasing."

But there is a fair amount of mystery, in part because our records — even in so-called 'data-rich' regions — don't go back that far. In fact, a lot of the estimates are built on reconstructions, often from corals and sediments to build models spanning thousands of years.

BRADDOCK LINSLEY, COLUMBIA UNIVERSITY: "Intermediate waters have been warming quite a lot, in the last 50 years. The rate of warming today is about 15 times what it was ever in the past, in the last 10,000 years."

As for how scientists currently measure surface temperatures, as the BBC reports, one source — used in the most recent reports — is Argo, a robotic fleet of some 3,600 thermometers deployed across the planet's oceans, starting in 1999.

DR. SUSAN WIJFFELS, CSIRO: "It will dive to one kilometer, drift for a while and then dive to two kilometers, and then start measuring things all the way up to the surface."

And there's no mystery about the Argo floats' findings — the surface temperatures are definitely rising, and fast.

That's probably at least partly because they bear the brunt of the sun's energy, which is increasingly absorbed and retained. (Video via NASA)

Some experts have suggested to clear up the remaining mysteries about why the surface water temperatures are increasing so much faster than deeper waters, scientists will need new probes, like Argo, to go deeper.

This video contains an image from Sean McCann / CC BY NC SA 2.0.