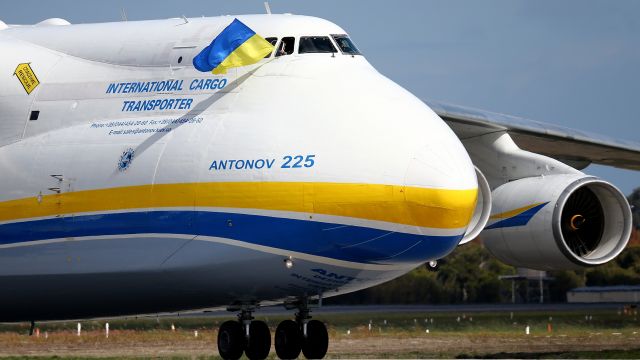 SMS
World's Largest Plane Lands In Australia Carrying A Massive Payload
By Matt Moreno
By Matt Moreno
May 16, 2016
The Antonov AN-225 aircraft, nicknamed "Mriya," was traveling from Prague to Perth, Australia, to transport a 130-ton generator.
SHOW TRANSCRIPT

It's not every day you see a 275-foot-long plane carrying a 130-ton generator take to the skies.

A Ukrainian cargo jet named "Mriya" made a rare flight over the weekend, landing in Australia on Sunday to a sea of spectators waiting to get a good look at the world's largest plane.

The plane departed from Prague for this trip, picking up a massive generator. One official in charge of moving the generator told ABC Australia, "It is [130 tons] of solid steel, so there is only one aircraft in the world that can carry that cargo."

The Antonov AN-225 aircraft made stops in Turkey and Malaysia before touching down in Perth on Sunday.

The plane was originally designed in the 1980s as part of the Soviet Union's space shuttle program. The idea was to have it serve as a midair launch pad for space shuttles to save fuel and money, but the plans never fully went into action.

Instead, Mriya, which means dream in Ukrainian, makes one or two trips a year, carrying large (and we mean large) payloads.

So while this might be a sight to see for aviation lovers, it's just all in a day's work for the massive plane.