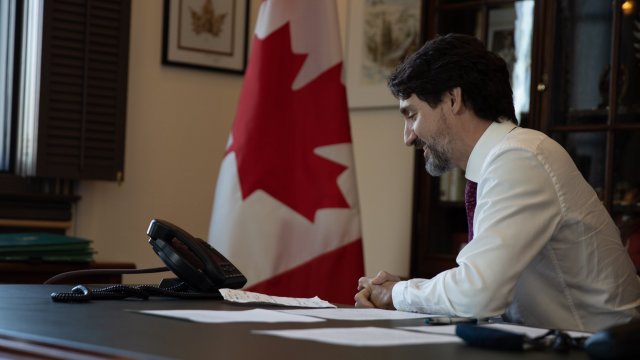 President-elect Joe Biden has talked with the leaders of Canada, the U.K., Ireland, Germany and France.

As the Trump administration doubles down on its refusal to concede the election, America's allies are wasting no time preparing for an incoming Biden presidency.

After the vast majority of world leaders sent the president-elect congratulatory messages, some are now calling him to discuss shared goals and challenges.

Canadian Prime Minister Justin Trudeau kicked off the diplomatic calls and was followed by the leaders of Germany, Ireland, the United Kingdom and France.

In each call, Biden and his counterparts vowed to collaborate on fighting the pandemic and climate change, issues the Trump administration has largely downplayed.

And Prime Minister Boris Johnson invited Biden to attend international summits in the U.K. next year.

"I look forward to working with President Biden and his team on a lot of crucial stuff for us in the weeks and months ahead: tackling climate change, trade, international security," Johnson said.

In other years, these conversations would be seen as formalities.

But as President Trump and his allies hang on to their claims of voter fraud and even victory, the phone calls prove that most of the world is ready to move on.

Still, the president isn't completely isolated on the world stage. The leaders of Mexico, Russia and China say they are waiting for the end of legal challenges to recognize an election winner.