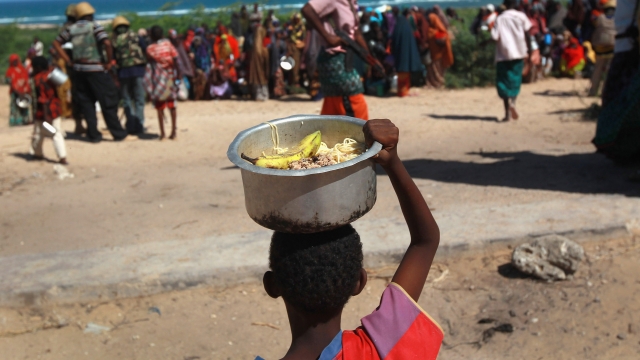 By Melissa Prax
May 28, 2016
More than 795 million people around the world don't have enough food.
SHOW TRANSCRIPT

May 28 is World Hunger Day, part of an initiative that aims to find solutions to hunger and poverty for the 795 million people around the world who don't have enough food.

A majority of those without enough to eat live in developing countries — especially in Asia — and 60 percent are women and girls.

Cycles of poverty and gender inequality keep people trapped, unable to provide for their families.

Female farmers in many parts of the world can't get supplies and equipment as easily as their male counterparts can. But if they were able to, it could have a substantial impact: The World Food Programme estimates 150 million more people could be fed.

Natural disasters and wars introduce another portion of the global population to hunger.

"My husband has gone back to check if any of our crops are still there," a refugee from Chad said.

A solution may be hard to come by, but the crisis overall appears to be improving. In 2015, 12.9 percent of the population was undernourished. That's down from 23.3 percent in 1992.

"We have been waiting for the voucher like for a god to come. It is as simple as that," a Ukrainian mother said.