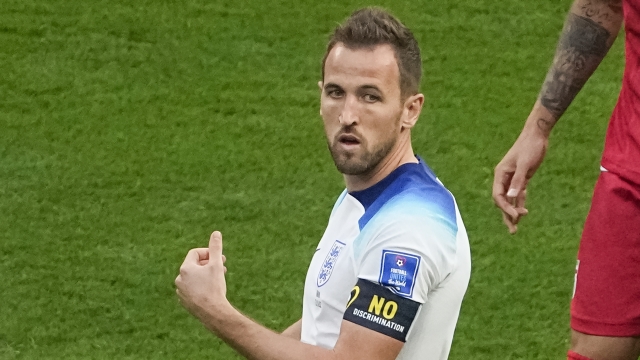 A few days into the World Cup and controversies already threaten to overshadow play on the field.

Soccer's governing body announced at the last minute it would punish players with a yellow card if they wore the armband, effectively shutting down their campaign. Two yellow cards result in a player's expulsion from a match.

On Tuesday, U.S. Secretary of State Antony Blinken, who is visiting Qatar, blasted FIFA's threats and attempt at compromise.

"It's always concerning from my perspective when we see any restrictions on freedom of expression," Blinken said. "It's especially so when the expression is for diversity and for inclusion. No one on a football pitch should be forced to choose between supporting these values and playing for their team."

Off the field, some soccer fans wearing rainbow signs say they are being harassed by stadium security.

"I showed up at the stadium last night, and instantly I was pushed aside by the security guards at the media entrance," said Grant Wahl, senior writer for Sports Illustrated.

I’m OK, but that was an unnecessary ordeal. Am in the media center, still wearing my shirt. Was detained for nearly half an hour. Go gays 🌈 https://t.co/S3INBoCz89

Wahl tweeted that he was detained for nearly half an hour and asked to change his t-shirt.

"I was told explicitly, 'You need to take off your shirt. That's a political statement, and you cannot enter because of that,'" Wahl said. "They continued to try to get me to take off my shirt. They stood above me as I sat and angrily yelled at me. Only after about 30 minutes did a commander come down and let me through, wearing my shirt, and he apologized, as did FIFA."

So, despite fine words from @FIFAWorldCup before event @Cymru rainbow Bucket hats confiscated at stadium, mine included. I had a conversation about this with stewards - we have video evidence. This #WorldCup2022 just gets better but we will continue stand up for our values 🌈

This was the emblem I had on the Qatar metro. Smaller than my hand. Wasn’t waving it, wasn’t speaking to anyone, wasn’t trying to provoke. Genuinely wanted to watch US-Wales match while supporting marginalized groups in the smallest of ways #FIFAWorldCup https://t.co/Q3MHlSKsmT pic.twitter.com/NaQ05VOeaV

While homosexuality is criminalized in Qatar, national officials sent mixed messages about the flags in the months leading up to the tournament.

Last month, the head of Qatar's World Cup, Nasser Al Khater, added to the confusion with a vague answer to Sky News after a reporter asked to clear the confusion on whether fans can come bearing a rainbow flag.

"Look, everybody is welcome here, all we ask is for people to be respectful of the culture," Al Khater said.

FIFA told ITV News last week that LGBTQ soccer fans would not face repercussions for expressing themselves within tournament zones.

FIFA didn't immediately respond to Newsy's request for a statement.

It's unclear whether the organization has changed its rule on fans' rainbow symbols or whether the guidance is being enforced unevenly by local security officers.