World Cup Facts To Make You Seem Like A Football Fanatic 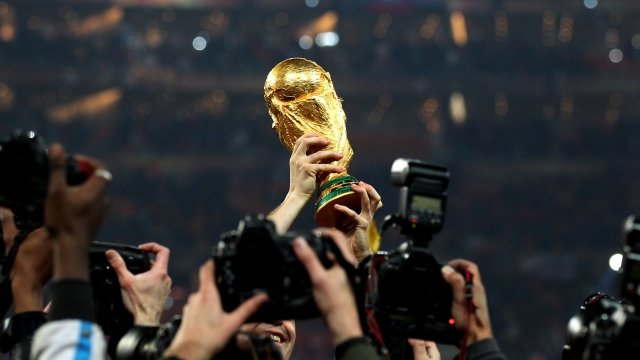 Did you know World Cup champions don't get to take the trophy home? More on that and four other facts to prep you for the 2018 World Cup final.

World Cup fever is soon coming to an end. And what a ride it's been.

You might not be really into "the beautiful game," but you and I both know you'll watch the final — France v. Croatia — with friends or family. So let's impress the hell out of them with some fun and memorable World Cup facts.

1. The winning team will not take home the famous 18-carat gold trophy. Sure, they will endlessly lift it during the award ceremony and take thousands of selfies with it, but at the end of the day, they'll give it back to FIFA. And instead, they'll receive a gold-coated replica. That's because the previous World Cup trophy was stolen and never recovered. By winning the World Cup three times, Brazil earned the right to become permanent owners of that original trophy in 1970, only to have it stolen 13 years later.

Flying a rainbow flag in Russia is illegal, even dangerous. But 6 protesters from 6 different countries found a way to show LGBT love in Russia.

2. The winning country and the host nation, Russia, could experience a baby boom, which is what this Hyundai commercial is all about. So move over, FIFA trophy, we got babies! German hospitals reported a sharp rise in births nine months after the country hosted the tournament in 2006 — and finished third. The exact same thing happened in Iceland nine months after their historic win against England at the 2016 Euro Cup. Believe it or not, a similar baby boom may have happened in Washington, D.C. ... as a result of the 2013 federal government shutdown.

3. Whatever team lifts the trophy will probably be cursed at the next tournament in Qatar. Of the past five World Cup champions, four were knocked out of the following World Cup in the group stage. The exception was 2002 winner Brazil, who made the quarterfinals in 2006.

4. The 2026 World Cup will be the first of its kind in many, many ways. Hosted jointly by the U.S., Mexico and Canada, it will be the first time a World Cup is organized by three countries. And Mexico will become the only country to have hosted the World Cup three times. Also at that tournament, the number of participating nations will jump from 32 to 48.

A soccer World Cup for regions not included in FIFA recently took place in London, featuring teams such as Tibet, Cascadia, Panjab and Tamil Eelam.

If you're worried about travel time for players and fans between a stadium in Canada and a stadium in Mexico, well, remember that the current World Cup is in gigantic Russia! Sochi and Kaliningrad — two cities that hosted matches — are a staggering 1,700 miles apart.

5. What about the Women's World Cup? The first tournament was hosted by China in 1991 and won by the U.S. — 61 years after the first men's tournament in 1930. The U.S. women's soccer team would also go on to snag the World Cup two more times in 1999 and in 2015, more than any other nation. For the men: Brazil holds the all-time lead with five trophies, followed by Germany and Italy with four wins each. This year's contestants, France and Croatia, only have one combined World Cup between them: France's 1998 triumph, the same year Croatia began competing as an independent nation.

By now, your watch party is of course dazzled and probably asking for more of your encyclopedic knowledge — especially if the final goes to extra time. How about this: You thought the Super Bowl was a big deal? The 2018 Super Bowl was watched by 103.4 million viewers. The last World Cup final? Watched by 1 billion viewers in 2014.