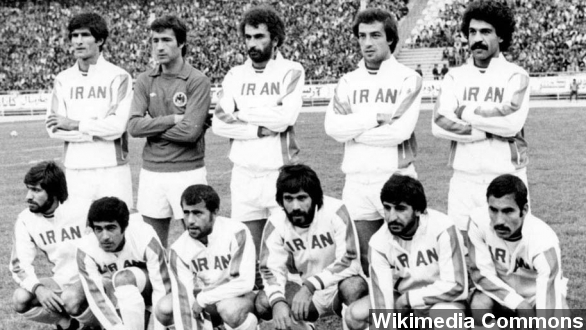 By Sebastian Martinez
June 16, 2014
For Iran, playing in the World Cup has real political consequences back home. ​
SHOW TRANSCRIPT

Iranian and Nigerian representatives are meeting, but not at a global summit. They're meeting on a soccer field in Brazil. Here's why that's important.

The Iranian national team starts its fourth World Cup campaign Monday, and for the isolated country, the tournament has often had very real political consequences. (Via Wikimedia Commons / Parmida Rahimi)

Team Melli, as they're known in Iran, first qualified for the World Cup in 1978, just a year before the revolution.

​After the revolution, soccer was seen as a symbol of western imperialism, and the sport all but died out until the early '90s when the national team was allowed to start playing in qualifying tournaments again. (Via Youtube / OtherWorldWorks)

When Team Melli finally managed to qualify for the World Cup in 1998, the country was swept up in spontaneous celebrations, and shows of defiance against the government.

​Soccer columnist David Goldblatt writes, ​"...the streets of Tehran and every provincial city filled with people... Women and men openly mixed, some abandoned the veil. Others danced on the roofs of the Toyota trucks used by the moral militias.” (Via Al Jazeera)

The country saw similar scenes when Iran qualified for the 2006 tournament, and in 2009 some players wore green wristbands to support the anti-government Green Movement. (Via Flickr / TauSo, Wikimedia Commons / Hamed Saber)

So what does this year's tournament have in store for Team Melli, and what will it mean on the ground in Iran? Iran is probably the least prepared team coming to this World Cup, having only played one friendly all year. They even had to abandon a training camp in South Africa because of low turnout.

And economic sanctions mean the team has less money to spend on essentials, like the team uniform. The Guardian reports the team's jerseys are made of such cheap material that they have to be washed in cold water to avoid shrinking.

Nevertheless, the spirit of openness that President Hassan Rouhani campaigned on is reflected in this year's team. (Via Press TV)

Portuguese manager Carlos Queiroz has, for the first time, called up Iranian players born or raised in exile, such as goalkeeper Daniel Davari and forward Ashkan Dejagah.

And Time reports Iran's training staff is the most diverse at the World Cup, even including an American. Goalkeeping coach Daniel Gaspar, a long-time collaborator of Queiroz, is a Connecticut native.

Expectations are low: Iran has to take on tournament favorites Argentina, as well as Bosnia-Herzegovina and African champions Nigeria in the group stage. (Via Flickr / Muladar News, Flickr / Brad Tutterow, Flickr / Globovision)