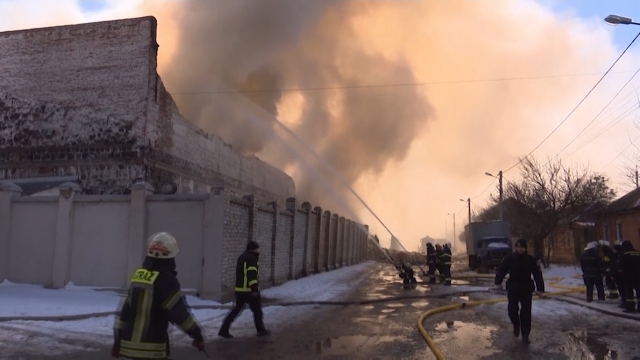 SMS
Experts Say It's Too Soon To Call The War In Ukraine A 'Genocide'
By Sasha Ingber
By Sasha Ingber
March 16, 2022
The International Court of Justice found Russia's claims of genocide to be false and ordered it to stop attacking Ukraine.

While the U.S. warned that Russia could use a false flag operation to invade Ukraine, Vladimir Putin invoked a legal term to justify invasion baselessly saying the Kyiv regime was committing genocide on people in the East and that Russia would save them.

"There is absolutely no truth to Putin's claim that Ukraine is perpetrating genocide against Russian speaking peoples in the Donbass region of Ukraine. This is a misappropriation and a misuse of the term genocide for political purposes," International Association of Genocide Scholars President Melanie O'Brien said.

Two days into the war, off of the battlefield Ukraine turned to a courtroom that has jurisdiction over disputes on genocide. On Wednesday, the International Court of Justice found Russia's claims to be false and ordered it to stop attacking Ukraine.

"The Russian Federation must, pending the final decision in the case, suspend the military operations that it commenced on 24 February 2022 in the territory of Ukraine," International Court of Justice President Joan Donoghue said.

It's mostly a symbolic win. But Ukrainian officials, including President Volodymyr Zelenskyy, also accuse Russia of committing genocide on Ukrainians.

"I will appeal directly to the nations of the world if the leaders of the world do not make every effort to stop this war. This genocide," he said earlier this month.

So have some lawmakers in Congress, including Ukrainian American Rep. Victoria Spartz.

"This is not war," she said. "This is genocide of the Ukrainian people by a crazy man."

Since Feb. 24, Putin's forces have used cluster bombs and other weapons to strike homes, schools, hospitals, a Holocaust memorial, a theater and evacuation routes. Troops have also invaded nuclear power plants and besieged the city of Mariupol.

"It's almost like Putin has a checklist of the laws of war and is checking them off and violating them as they go," said Stephen Rapp, former U.S. ambassador-at-large for global criminal justice.

NEWSY'S SASHA INGBER: Could what we're seeing amount to a genocide?

STEPHEN RAPP: They look very much to me, as a war crimes prosecutor, like war crimes. A finding that there's an intent to destroy all people of Ukrainian nationality or a significant part is a much harder thing to prove. And I think that this is much too early to draw that conclusion.

Rapp says a genocide designation requires not just acts but intent to destroy a group of people, and that's a distinction from controlling them.

Putin has denied Ukraine's separate identity, writing "we are one people." But experts say much more is needed.

"Genocide is a process, not an event," said Melanie O'Brien. "And you can't actually get to the end of that process, which is usually killing, without all the steps that come before it. And one of the things that a genocidal regime needs to do to actually get to the killing stage and to be able to carry out the killing, without objections from the majority population, is that they need to convince the majority population that this target group is the enemy and that they need to be taken out, and part of the way to do that is to dehumanize the target group."

Prosecutors say there will be ways to gather evidence of Russia's intent: Men captured on the battlefield, crashed planes and that the invasion risks becoming a genocide.

"Quite often the crimes of war, where you are trying to take control of an area and that area is resisting as those people are fighting back, can eventually lead to a desire to destroy that whole people in order to have that resistance eliminated. And so you start with one thing and get to another," Rapp said.

For now, the war continues.