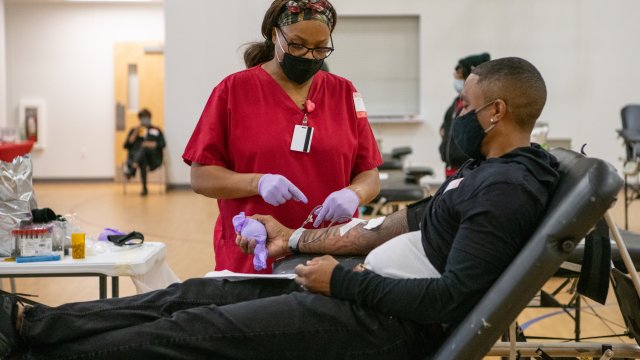 When it comes to cancer treatment, blood donations may not be the first thing that come to mind

"So I was like, OK, so basically it was going to save my life," said Myel Bowers-Smith.

Bowers Smith is a breast cancer survivor. She’s been in remission since 2017 and underwent six rounds of chemotherapy.

"Ninety percent of the battle for me was to stay positive," she said.

Part of the battle was also going into surgery, which is when she realized how valuable blood donations are.

"It wasn't until later on in my treatment when I was getting prepped for surgery, where it became important because I guess I'm a bleeder and my blood wasn't clotting," said Bowers-Smith.

Her platelet count was low, which makes it harder for blood to clot. Chemotherapy often kills the platelets in a patient's blood. The American Red Cross says, right now, hospitals face a platelet shortage because people aren't donating.  On top of that, more patients are visiting the hospital or the doctor's office right now.

"Now that we're starting to come out of the pandemic and activities are beginning to resume, we're seeing an increase in medical care that had previously been canceled or postponed," said Rodney Wilson of The American Red Cross. "This is causing an increase in the need for blood to to provide all of these types of medical treatments. And at the same time as we're seeing the increase, we're seeing fewer people coming to donate."

Another complication: Platelet shelf life is less than a week., making the push for donations  that much more urgent.

"Just imagine me going through it and and it wasn't available," Bowers-Smith said. "You know, I wouldn't be here to tell the story or I would have been waiting for surgery or I would have the complications. I believe that everybody should if they can go out and donate as much as possible."