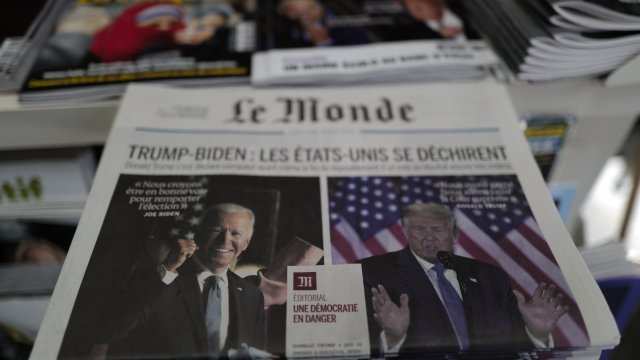 SMS
World Anxiously Awaits U.S. Election Outcome
By Ben Schamisso
By Ben Schamisso
November 4, 2020
America's allies hoped for a swift and uncontested resolution while some in Iran in China hoped to capitalize on the nervousness around the outcome.
SHOW TRANSCRIPT

Just like Americans, people around the world are anxiously waiting for the U.S. presidential election to be decided.

"Hopefully there's patience and the electoral system will prevail but I think it is going to be edgy," said Paul Brown, a London resident.

In the absence of an immediate winner between President Donald Trump and Joe Biden, speculations on which one will capture the White House and how quickly turned global.

"Our president had a good relationship with Trump and hopefully it will be for the better," said Mexico City resident Christian Ruiz.

America's allies hoped for a swift and uncontested resolution — some expressing alarm over the prospect of unrest and condemning President Trump's demand to stop counting votes.

"it was really a surprise when President Donald Trump stood up in front of the microphone at his speech and, you know, more or less said, you know, we won that thing," said Peter Beyer, the German government coordinator of transatlantic cooperation.

There was also some expected gloating in China, Iran and other countries hoping to capitalize on the nervousness around the outcome.

The editor in chief of a Chinese state-media outlet shared videos of stores in the U.S. boarding up ahead of the election, adding that the "U.S. is in degradation."

And Iran’s supreme leader Ali Khamenei mocked the U.S. by highlighting claims of fraud by both candidates.

The Russian government has not commented yet. But Russia's main opposition leader Alexey Navalny lauded the uncertain outcome as a democratic feature of "real elections."