Federal Workers Say They're Hurting As Shutdown Drags On 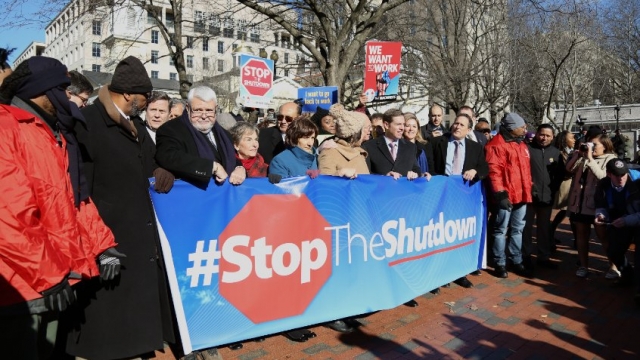 Ryan Baugh says he wants to get back to work.

"Nobody that I've spoken to has said they are happy to be working without pay or not allowed to do their important work," Baugh told Newsy from his Washington D.C. home.

He works at the Department of Homeland Security as a statistician and is also a union representative for his co-workers. The partial government shutdown has made him to put off his plans of buying a home, and forced him to dip into his savings to pay bills.

And he's one of over 800,000 workers going without a paycheck until the debate over President Trump's demand for border wall funding is resolved.

"If I knew when this would end I could maybe make a well informed decision," Baugh said. "But I need everything I've got to just to just ride me through this however long it goes."

Over 32,000 DHS employees are furloughed with approximately 178,000 people working without pay.  A Newsy analysis found the aggregate salary loss within DHS alone to be over $730,000,000 every two weeks.

Ryan joined hundreds of supporters and federal workers from across the country demanding an end to the partial government shutdown which has frozen operations for a quarter of the federal government. For some there's a growing sense of urgency as the shutdown draws out to become the longest in U.S. history.

"I've been talking to my mortgage company as of this morning and they reminded me they weren't a charity so," said Matt, a furloughed government worker who did not want to give his last name or employment agency to avoid any conflicts of interest. "[The mortgage company] said they'll have future policy about handling this but they haven't got anything set yet," he added. "So I'm expected to meet my next mortgage payment which is my first order of business."

According to AFGE, the largest union for federal workers, most members take home about $500 home per week. One missed paycheck could mean financial ruin. Congress has approved back pay but there's no immediate relief in sight to pay bills that workers have now.

"A lot of us and a lot of my old colleagues [are] contemplating filing for unemployment to kind of make ends meat," De'Neal Gilliam told Newsy during a rally outside the White House. Gilliam also avoided discussing which government agency she worked for.  "I know a lot of people are maybe looking towards like getting zero percent interest loans that a lot of credit card companies are offering but it's kinda just like what do you do."

In Washington alone, officials say just over 5,800 federal workers and contractors filed unemployment claims since the start of the partial shutdown.

With no clear end in sight to the impasse in negotiations between President Trump and congressional Democrats, federal employees say they are feeling mistreated as their work piles up.

"You're canceling meetings, you're canceling training you're canceling important projects or you're tabling them for now because you don't know if you'll be there next week," Baugh said. "So even these partial or these almost shutdowns have a bad effect on productivity and doing the work that the American taxpayers pay us to do."