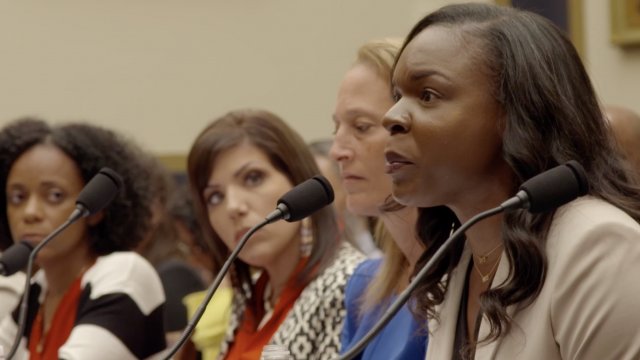 In the wake of hundreds of protests across the country and a handful of states passing similar bills banning abortion once a heartbeat is detected, abortion is back up for debate in America. Tuesday, members of Congress heard from eight women from various backgrounds about their thoughts.

Actress Busy Philipps made headlines in May disclosing she had an abortion at age 15.

"People have told me I am brave. But the word bravery didn't sit with me. … Why is it brave? In my life I have had many procedures, but no one has ever called me brave for having them. Abortion is health care," she said.

She talked to Newsy after the hearing.

"It's important to de-stigmatize abortion care. Women need abortions for different reasons, and all of them are valid. They have formulated an opinion about the kind of woman who gets an abortion, and I just want to say I am one of them," she said.

Melissa Ohden, on the other hand, spoke about her experience finding out she survived a failed abortion before being placed up for adoption. She says she is "pro-life" with no exceptions.

"I often tell people, when you find out when you are that choice or you are what someone would say is an exception, it really does change your life. And to see the value in every human being regardless of how they were conceived," Ohden explained.

Half of the six Republicans on this House Judiciary subcommittee attended the hearing. Democrats led the conversation and questioning. Most focused on the mounting number of states passing their own laws. Dr. Yashica Robinson, who practices in Alabama, says she already has difficulty performing abortions due to the laws. Proponents say that's the point. But she says facing 99 years in prison is wrong.

"Of course I worry about that. But I worry more about access patients will lose because of this."

While these laws are being passed on the state level, many are wondering if it's Congress that should be taking up the issue.

Congresswoman Lee says Congress needs to reinforce Roe v. Wade and ensure the Supreme Court upholds its precedent. If not, she says Congress may need to codify abortion rights into law.

But the likelihood of abortion rights becoming law right now is almost nonexistent. Reality is setting in for many that the battle over abortion may really be just beginning.

"Let us not speak of abortion as a victimless crime. At best, abortions aim to ease one person's suffering at the expense of another person's existence," said Congressman Doug Collins, the Republican ranking member of the House Judiciary Committee.