A #DayWithoutAWoman Prompts Marches, Walkouts And Lots Of Red 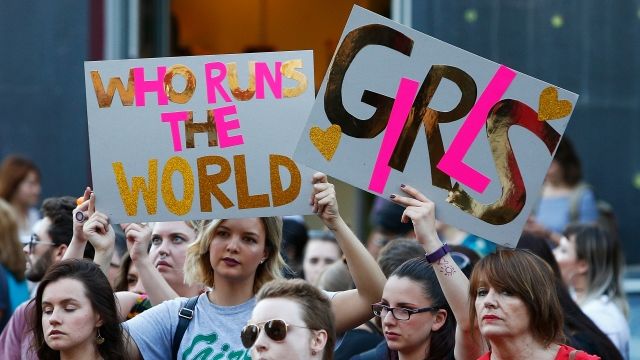 Some women are staying home from work to send a message.

"A Day Without a Woman" corresponds with International Women's Day. The goal is to highlight how much women bring to the workforce despite wage inequality, discrimination and sexual harassment.

Since the early 1900s, International Women's Day has been observed in some form to call for gender equality.

Marches and walkouts were planned around the world, and women were encouraged to avoid shopping.

Some school districts canceled classes because so many teachers said they'd be staying home.

On social media, some women — and men — showed solidarity by wearing red.

A Woman's Job — The Football Coach

The "Day Without a Woman" was organized by the same group that inspired the Women's March in response to President Donald Trump's inauguration.

In the U.S., women make up nearly 47 percent of the labor force. And the median annual earnings for women in 2014 were more than $10,000 below the median earnings for men.