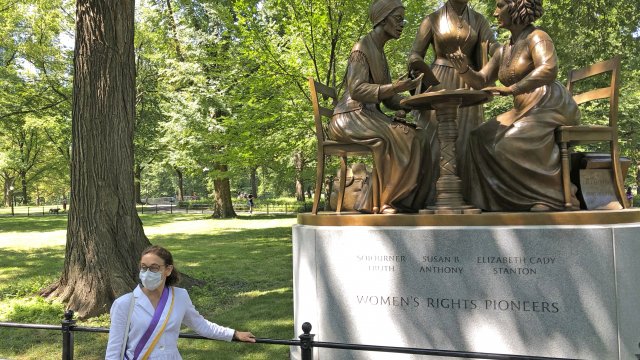 SMS
Women's Suffrage Monuments Highlight Lack Of Statues To Women In U.S.
By Katherine Biek
By Katherine Biek
August 28, 2020
In honor of the 100th anniversary of the 19th Amendment, at least two monuments honoring the women's suffrage movement have been erected in the U.S.
SHOW TRANSCRIPT

When it comes to monuments in the U.S., those honoring women are few and far between.

Joy Marie Giguere: "There's about 5,200 monuments nationwide — monuments and public statues. And right about 394 are to women. … So they represent about, maybe, 7.5% of monuments overall across the country."

Giguere: "If we look at the history of monument-building in the United States, it really only begins in earnest in the 19th century. And what Americans by and large do, is they follow a pattern of erecting monuments to military achievements or losses; to soldiers and sailors; to military commanders and generals; and also to major politicians — like presidents and senators or people who were known as great orators and things like that. And, of course, looking at those kinds of patterns, they're inherently male."

Many of the statues of women erected in the U.S. are allegorical, with the Statue of Liberty being the most obvious example: a 305-foot-tall personification of hope and freedom.

But the small number of monuments honoring real women is growing, thanks to two new monuments recently unveiled to commemorate the women's suffrage movement: one in Lexington, Kentucky, and the other in New York City's Central Park. The latter features Elizabeth Cady Stanton, Susan B. Anthony and Sojourner Truth, all of whom were leaders at the start of the movement.

Meredith Bergmann: "My inspiration really came from the lives of these women. And the cumulative quality of their work. … I wanted to show them working together because I think that's an image we need right now."

Meredith Bergmann's statue is also notable because it's the first monument in Central Park that depicts women who actually existed.

A bill to erect a similar statue of the suffragists in Washington, D.C., is still working its way through Congress — which has to authorize any new monuments established in the nation's capital. The legislation was introduced by Rep. Joe Neguse of Colorado, who welcomed a daughter last year.

Neguse: "I want to ensure that her and every girl growing up alongside her feel represented, empowered and are ensured of the fundamental role that they play in our society."

But Giguere says representation is not just about the number of statues of women in the U.S. — but also where they're placed.

Giguere: "We don't have these massive, larger-than-life sculptures and statues in major public arenas. They seem to be very much tucked into public parks or in neighborhoods where you really have to be looking at them. So it's not just a matter of the lack of monuments, but I think there's also a certain lack of visibility of the monuments that do exist."