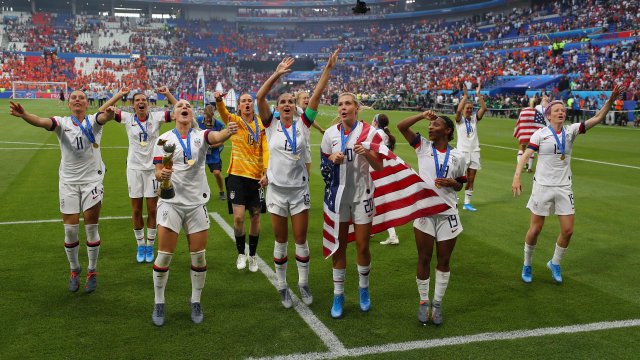 The team asked a judge to award them nearly $67 million in damages and forgo the trial. The players accuse the U.S. Soccer Federation of basing compensation decisions on "gender stereotyping."

The Federation responded with a motion of its own, asking the judge to dismiss the lawsuit entirely. The organization argues the men and women have separate labor deals and that the women received more compensation than the men.

The filings also showed the two collective bargaining agreements for the men's team and the women's team. It's the first time these documents are available to the public. There are noticeable pay structure differences, with men earning their money through bonuses and call-ups, while the women have a combination of guaranteed salaries and bonuses.

A spokesperson for the players contends the women never rejected an identical pay structure to the men, but says the bonuses offered were smaller.

According to the filings, a men's player who played in all World Cup qualifying games in 2018 earned more than $179,000, despite the team failing to qualify for the World Cup. A comparable women's national team player earned a total of $200,000 during last year's World Cup title run. More than half of that amount came from winning the title.

The trial date for the lawsuit is set for May 5.

Additional reporting from Ronald Blum of the Associated Press.