Women Owe Most Of The Student Loan Debt In America 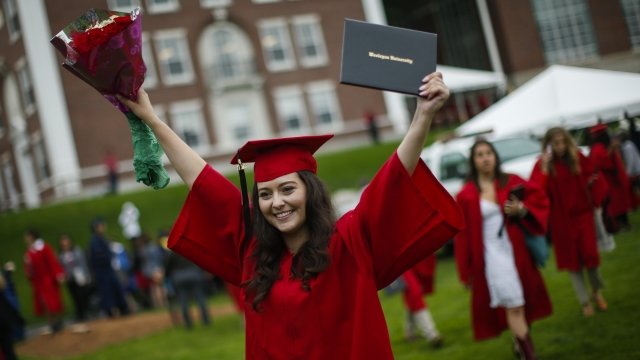 Americans owe more than $1.5 trillion in student loan debt, according to the Federal Reserve, and women reportedly hold around two-thirds of that debt.

A recent report from the American Association of University Women calls it a crisis for women.

The latest numbers from the National Center for Education Statistics found women made up 56 percent of undergraduate enrollment in the fall of 2016.

And the AAUW reports women took out an average of 14 percent more in student loans than men in 2015 to 2016.

The AAUW says part of the crisis lies in repayment and attributes some of the problem to the gender pay gap. According to the Pew Research Center, "Women earned 82% of what men earned" in 2017. The research looked at "hourly earnings of both full- and part-time workers in the United States."

Another reason noted in the report is that for-profit colleges and universities disproportionately enroll more women as well as "people of color, low-income students, and members and former members of the U.S. military." And the report claims for-profit institutions have more students who drop out and default on their student loans.

The AAUW has some recommendations to fix the "crisis," including supporting state and federal funding for college and supporting loan repayment plans "that reflect borrowers' realities." The report also calls on Congress to pass legislation to help end the gender pay gap.