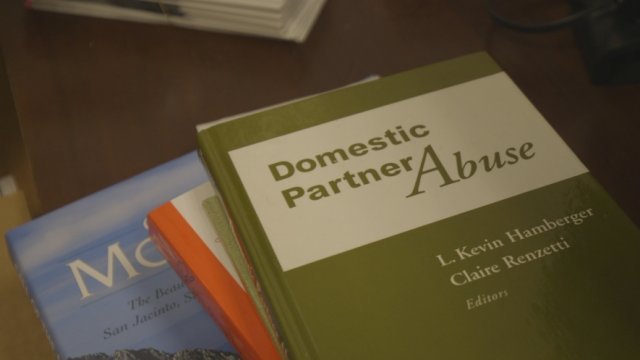 Gloria remembers the early days of her relationship with fondness. "He was very pleasant. He was a smiling person," she says. "A very nice relationship. I feel at this time we are a good match."

We're not using Gloria's real name or showing her face for her own safety.She says she met her boyfriend Robert through mutual friends while living in Denver. But, according to Gloria, it all changed when she moved to Las Vegas to live with him. "I like the way he showed me he is but he is not that person," she added.

She says the abuse began within a month of moving. First, through finances. The couple opened a joint checking account. She says he drained the account 4 days after opening it.Then came intimidation. Robert, a former veteran, is a gun owner.

"Twice he put the gun on his head saying I’m gonna kill myself," she recalls. She says she was worried he was going to hurt her. Gloria began taking safety precautions. She says she avoided arguments and lived on alert. After all, the mattress they slept on had bullet holes in it from a night where he shot at it in a fit of rage.

"When he was sleeping I was sleeping. When he was up I was up. I don't feel comfortable when he’s up," she said. After living in fear for months Gloria left her home, and her relationship. That was just two months ago.

"He’s still chasing me. He wants to know where I am," she tells us. Though she's living in a safe house at an undisclosed location, she still doesn't always feel protected. "Sometimes when I’m alone, my body really shakes," she added. "In my mind I’m not freaking out but my body is shaking."

But, people like Deanna McCool are there to help guide her through the process.She's got her work cut out for her. Having a gun in an abusive household puts people at greater risk of being killed. According to Everytown for Gun Safety, women in Nevada are 65 percent more likely to be shot to death by intimate partners than women nationwide. That makes Nevada the fifth highest rate of domestic violence gun murder of any state in the country. McCool says it's a delicate balance. Some women aren't yet ready to leave. She says it's not her job to tell people *when to leave but how to approach the specific situation at hand.

"We want them to safety plan where the exits are, how to get out, where to keep their documents, how to know when to get out. How to call 911," McCool explains. "When you are in a household with a gun and you are facing domestic violence your chances of being killed increase 500%. It is the most dangerous time."

Many stories are similar to Gloria's, where the partner threatens or carries out suicides. In fact, in Nevada, ⅔ of offenders kill themselves after murdering their intimate partner. In a five year period, all but one of them used a firearm. Nevada recently joined a growing list of states to close what is called the boyfriend loophole. "If a man beats his wife, he will be convicted of domestic violence. A boyfriend beats his girlfriend, it’ll be battery maybe and that's it. He can still go out and get a gun in some states," she added.

All this comes as Congress has yet to reauthorize the Violence Against Women Act, which includes an expansion of the boyfriend loophole that would extend to people convicted of stalking or under temporary restraining orders. With less than three weeks to go until midterm elections, this has been a sticking point for republicans who want to protect gun rights.  McCool says preventing abusers from getting guns will not only prevent intimate partner deaths, but it could prevent large scale massacres too.

"You can look at almost every single mass shooting in this country in the past 20 years and the ones that were highly 'mediazed' in this country all of them have histories of violence. The correlation between domestic violence and shootings is so high and we don’t talk about it," she says.

McCool believes domestic violence is preventable, and if schools start early, showing both boys and girls what healthy relationships look like, they could be preventing tragedy years down the line.