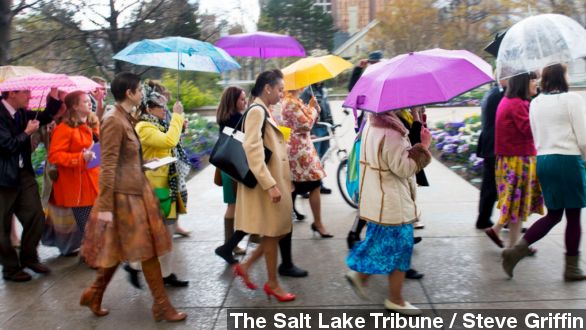 For the second time in six months, members of Ordain Women, a group advocating for gender equality in the Mormon Church, were not allowed into a Satur

For the second time in six months, members of 'Ordain Women' a group advocating for gender equality in the Mormon Church, were not allowed into a Saturday all-male priesthood session.

"I support equality in the church."

"It was sad to be turned away once again." (Via KUTV)

The Mormon Church's website describes priesthood as "the authority to act in God's name." The site goes on to say "all male members who are prepared receive the priesthood."

Reportedly, more than 400 women showed up outside of the 184th bi-annual general conference of the Mormon church and were all turned away at the door. (Via KTVX)

Last October, Ordain Women staged a similar demonstration outside of Salt Lake City's Temple Square, where 130 women were not allowed to buy tickets to another priesthood meeting. (Via Vimeo / Sunlight Cinema)

"As you might notice I'm a lot older than most of these women here, I've been raising these issues for over thirty years."

According to the Salt Lake Tribune, a statement released by the LDS church suggested "patience is wearing thin" when it comes to the group Ordain Women. The statement read, in part:

"Such divisive actions are not the kind of behavior that is expected from Latter-day Saints and will be as disappointing to our members as it is to church leaders."

The idea of women in the priesthood was also addressed during the conference where one leader in the church claimed women in many ways have the ability of the priesthood already.

"When a woman, young or old is set apart to preach the gospel as full time missionary she is given priesthood authority to perform a priesthood function." (Via YouTube / LDS Conference)

Despite Ordained Woman bringing hundreds of women out to protest, a 2011 Pew Research Study suggests they are in the minority. According to to this study 87 percent of U.S. Mormons oppose the idea of women in the priesthood and an even higher percentage, 9 out of 10, Mormon women oppose the idea.