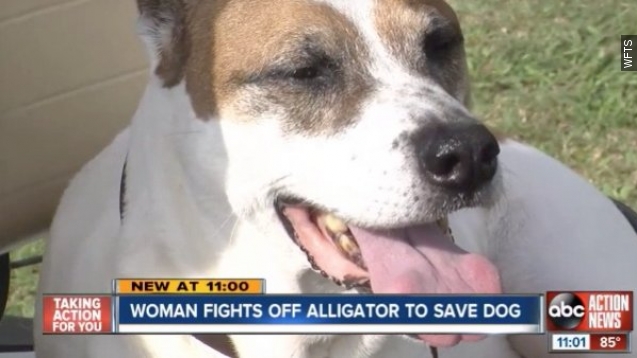 SMS
Woman's Bare Hands Stop Gator From Attacking Her Dog
By Ryan Biek
By Ryan Biek
July 23, 2015
A Florida woman jumped in a golf course pond to save her dog from the jaws of an alligator.
SHOW TRANSCRIPT

"I hear the most God awful, piercing scream that I have ever heard in my life," Lori Beiswenger told WFTS.

A Florida woman turned and saw this 7-and-a-half-foot alligator — her dog, Hope, in its jaws.

Lori Beiswenger told Newsy's partners at WFTS the gator trapped the dog in the golf course pond just outside her house. Without a second thought, she ran into neck-deep water and pulled on the gator's tail.

The alligator let go of Hope but then turned toward Beiswenger. She ran out of the water, but Hope was still struggling. That's when golf course volunteer Jodie Daniels jumped in.

"I thought it [Hope] was dead because all I could see was the whites of its eyes," Daniels told WFTS.

He tried to pull Hope out with a shovel, but the alligator had her in its mouth once again. So Daniels whacked the gator with the shovel.

Hope had a severed artery and needed emergency care.

So Beiswenger rushed her away in a golf cart, using a tablecloth as a tourniquet until they reached a nearby emergency vet.

Hope was in surgery for three hours; it was successful.

As for the gator, trappers put it down and sold its meat.

"I read him his Miranda Rights because he had his hands tied behind –– 'You have the right to remain silent,'" Beiswenger told WFTS while laughing.

Somehow, amid all the danger, Hope only needed a few stitches.