Woman Could Go To Jail Over Sand-Covered Lawn 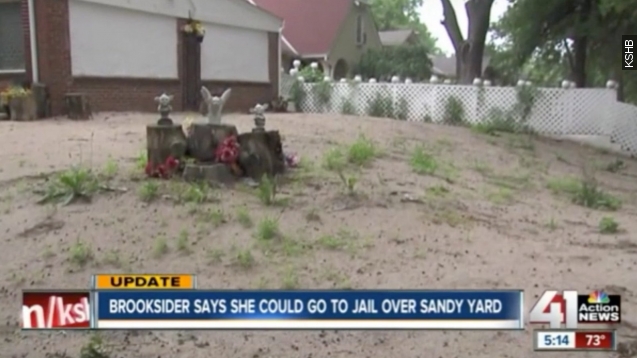 SMS
Woman Could Go To Jail Over Sand-Covered Lawn
By Ryan Biek
By Ryan Biek
June 22, 2015
A Kansas City, Missouri, woman filled her yard with sand three years ago, but now the city is saying she must remove it or go to jail.
SHOW TRANSCRIPT

"A thousand-dollar fine or a 180 days in jail. I have one parking ticket," Georgianna Reid told KSHB.

Kansas City, Missouri, officials told Georgianna Reed she has 10 days to remove the sand from her yard or appeal. Otherwise they could fine her $1,000 — and she could spend half a year in jail.

If that happened, Reid's life could end behind bars. Her doctors say she only has about six months to live. Her friends fear she'd die in jail.

Reid told our partners at KSHB she's lived in this house for 33 years, and three years ago filled her yard with sand. Her idea was to have a beachfront theme, but many neighbors complained.

"Having a house with sand in it –– it looks like it belongs out in Florida on the beach or something, like a beach home," a neighbor told KSHB.

Legally, Reid has the right to have sand in her yard. However, the city says rain has caused weeds to grow, as well as wash sand onto the sidewalk.

"I will take the sand out, but I'm going to an asphalt yard because I'm still not gonna mow," Reid told KSHB.

The city has yet to decide if it's opposed to the asphalt alternative.