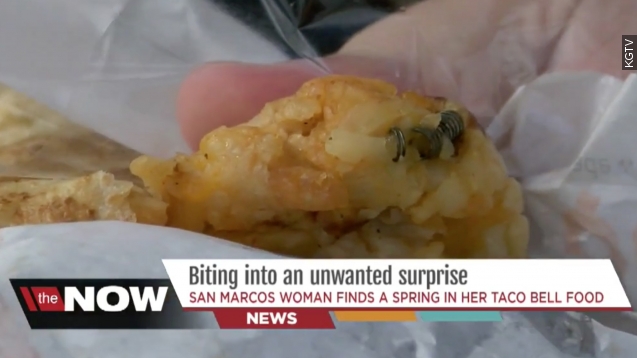 A woman's Taco Bell quesadilla had an extra, unwanted crunch to it.

"I could not believe that I saw this metal spring in my food," Aja Zaremba, the Taco Bell customer, told KGTV.

Yup, that's what appears to be the metal spring from a pen. The customer, Aja Zaremba, told Newsy's partners at KGTV she was concerned because her daughter could have been the one to bite into it.

"I'm just so grossed out, I don't think I'll ever come back. ... How did that end up in the food area?" Zaremba said.

A KGTV reporter sent the photos to Taco Bell headquarters after the customer couldn't get ahold of the restaurant in San Marcos, California.

"They responded immediately: 'We take this claim very seriously and immediately contacted the customer as soon as we were made aware of her experience. We, and our franchisee, are actively investigating,'" the reporter said.

Zaremba said it served as a "wake-up call" about eating fast food, and not just from Taco Bell.