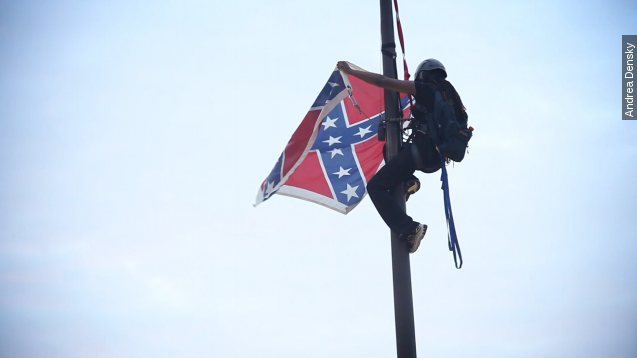 The Confederate flag flying on the South Carolina statehouse grounds that's caused so much controversy over the last week-and-a-half came down Saturday, though not by the state's own choosing.

Early in the morning, a woman climbed the flagpole located next to a Confederate soldiers memorial and removed the flag. A press release sent to media shortly after the event said activists wanted to remove "the symbol of white supremacy that inspired the massacre" in Charleston. (Video via Andrea Densky)

Since prosecutors say 21-year-old Dylann Roof entered a Charleston church and killed nine black members last week, critics of the flag have renewed their calls to have it taken off government grounds saying it's an emblem of hate. (Video via WJZY)

The people who put out the press release said the effort to take down the flag was organized by "local folks" and identified the woman who climbed the flagpole as Bree Newsome.

Newsome's website says she's an activist from North Carolina who has been arrested before for protesting voting rights there.

The press release quotes her as saying, "We removed the flag today because we can't wait any longer. We can't continue like this another day. It's time for a new chapter where we are sincere about dismantling white supremacy and building toward true racial justice and equality."

The Confederate flag in South Carolina has been a divisive issue, to say the least. Shortly after the shooting, seasoned lawmakers essentially dodged questions and told reporters that the flag is part of the state's heritage. (Video via CBS)

Earlier in the week, Governor Nikki Haley also began advocating for the flag's removal, though she'd previously brushed off the issue during a re-election debate.

Newsome was arrested for removing the flag. Shortly after, organizers tweeted they'd been told the flag would be put back up later in the morning.