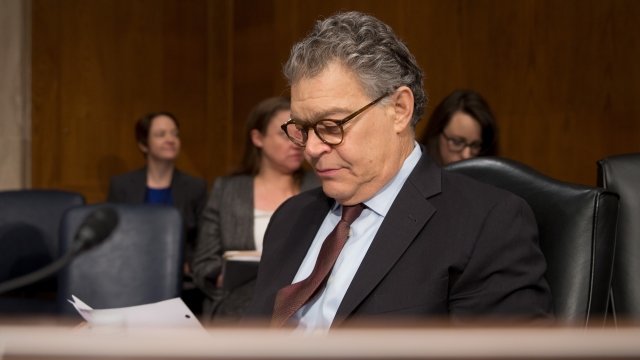 SMS
Another Woman Accuses Sen. Al Franken Of Sexual Misconduct
By Katherine Biek
By Katherine Biek
December 6, 2017
This is the seventh woman who's come forward with a sexual misconduct accusation against Franken.
SHOW TRANSCRIPT

Another woman has accused Sen. Al Franken of sexual misconduct.

A former congressional aide told Politico that Franken attempted to forcibly kiss her in 2006 after a taping of his radio show. Franken was not yet a senator at that time. As she left the room, Franken reportedly told her, "It's my right as an entertainer."

Franken denied the accusation in a statement to Politico, adding, "the idea that I would claim this as my right as an entertainer is preposterous."

If you've been keeping track, this is the seventh woman who's come forward with a sexual misconduct allegation against Franken in less than a month.

The majority of the alleged incidents took place before Franken began his first term in the U.S. Senate in 2009. Though, one woman accused Franken of groping her while they posed for a photo at the 2010 Minnesota State Fair.

Franken previously said he wouldn't be stepping down from the Senate.