Brittney Griner Appears In Third Moscow Hearing Without A Verdict 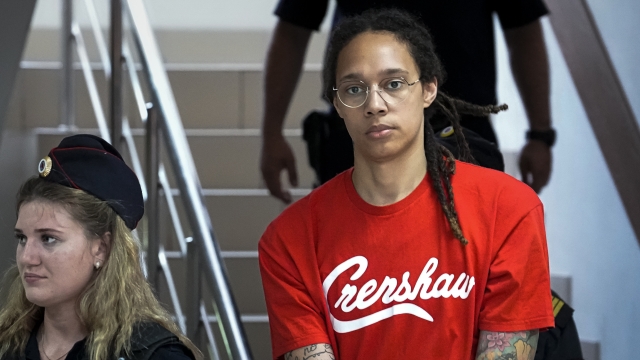 WNBA star Brittney Griner appeared in a court room just outside Moscow, Russia Thursday. It was her third hearing since being detained in Russia on drug charges back in February.

Members of Griner's Russian basketball club came to her defense, testifying in support of the high-profile American athlete.

This, as U.S. officials face mounting pressure to make a deal to free Griner.

Her attorneys may be advising a fine, lighter prison sentence, but Griner’s best bet at quick freedom might be a prisoner exchange, though Russian officials stand firm that negotiations will not happen until the proceedings are over.

Despite this, some politicians, celebrities and other high-profile athletes continue to speak out against the U.S.' handling of Griner’s case.

Los Angeles Lakers star Lebron James made a public critique in the trailer for an upcoming episode of his show “The Shop: Uninterrupted." After facing backlash himself, the NBA star clarified his comments, tweeting he “wasn’t knocking our beautiful country.” He said, "I was simply saying how she’s probably feeling emotionally, along with so many other emotions and thoughts being inside the cage for over 100 days.”

WNBA commissioner Cathy Engelbert reiterated during all-star weekend in Chicago that Griner remains top of mind for the league.

"She remains a huge priority for us, continues to have our full support, fully focused on getting her home safely and as soon as possible," Engelbert said.

Many of Griner’s teammates, fellow WNBA players and Rev. Al Sharpton spoke about the urgency to get her home.

Brittney’s wife, Cherelle, said she knows U.S. officials are up against a challenging situation but says she has faith in President Biden’s efforts.

Secretary of State Antony Blinken has vowed the U.S. government will not back down until “wrongfully detained Americans,” like Griner, are brought home.

Griner's hearing continues Friday. She is expected to make statement and answer the judge’s questions.