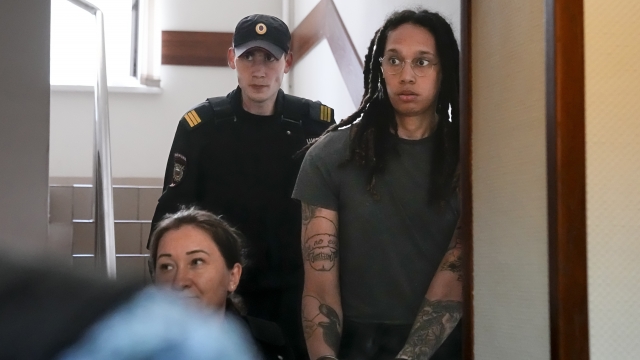 SMS
WNBA's Brittney Griner Honored At All-Star Weekend
By Haley Bull
By Haley Bull
July 9, 2022
Griner's attorneys are hoping for leniency as she faces up to 10 years in prison in Russia.

Family, friends and supporters continue to push for her return.

"I understand what they are doing is very challenging due to the circumstances with Russia and the United States right now, so I want to make it very clear our next move as supporters is to make sure admin understands they have our full support in doing anything and everything necessary to be able to bring BG home, as well as every other wrongfully detained American," said the basketball player's wife, Cherelle Griner.

Griner pleaded guilty in Russian court, saying she had acted unintentionally when cannabis vape cartridges were found in her luggage on her return to play there.

Her attorneys are hoping for leniency as she faces up to 10 years in prison.

"I hope the world knows she has stood up as that role model, as that person who has not had any borders or boundaries to using a craft, her art, her talent, for people all over the world," Sharpton said.

Fellow WNBA players and leaders also spoke out during the event.

"She is resilient kind and BG Brittney Griner is an American," said Nneka Ogwumike, president of the WNBA Players Association.

"As an athlete community made up of friends from around the world, we all feel rattled by this and just want her home," said Sue Bird, vice president of the WNBA Players Association.

The Biden administration says Griner is wrongfully detained, and that her plea won't impact negotiations.

President Joe Biden wrote a letter back to Griner — her wife said it brought joy.

"I believe every word that she said to him he understood, and he sees her as a person and he has not forgotten her, which was her biggest cry in her letter," Cherelle said.

The family of another American detainee, Paul Whelan, has raised concerns about differences in attention they receive.

Whelan is serving a 16-year prison sentence after being accused of spying.

A White House official said Friday President Biden called Whelan's sister, and that the  government will continue efforts for his, Griner's and other Americans' release.