WNBA All-Star Game Tips Off In Chicago Amid Griner's Imprisonment 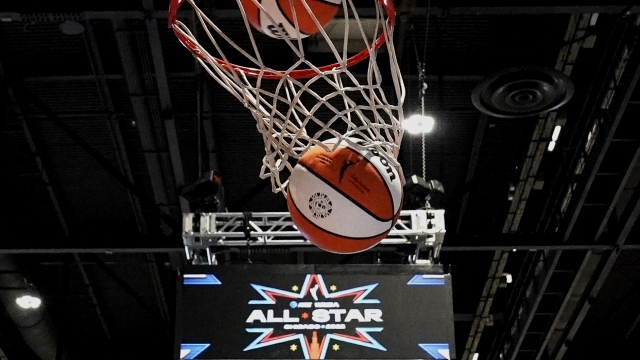 SMS
WNBA All-Star Game Tips Off In Chicago Amid Griner's Imprisonment
By Maura Sirianni
By Maura Sirianni
July 10, 2022
For almost five months, Brittney Griner has been detained in Russia on drug charges after she was arrested at a Moscow airport.

As an exciting WNBA All-Star weekend wrapped up Sunday with the All-Star game in Chicago, everyone in the league was thinking of Brittney Griner.

"She remains a huge priority for us, continues to have our full support, fully focused on getting her home safely and as soon as possible," said Cathy Engelbert, commissioner of the WNBA.

"She is resilient, kind, and B.G., Brittney Griner, is an American," said Nneka Ogwumike, president of the WNBA Players Association.

For almost five months, Griner has been detained in Russia on drug charges after she was arrested at a Moscow airport as she returned to play basketball. Top players like Griner can earn quadruple their base salary in the WNBA by playing in Russia over the winter off-season, according to the Associated Press.

During a court appearance Thursday, the 31-year-old pleaded guilty and faces up to 10 years in prison. Her attorneys are hoping for leniency after Russian authorities claimed they found cannabis vape cartridges in her luggage, which are illegal in Russia.

Griner said she packed in a hurry and acted "unintentionally." Still, a judge ordered her to stay in custody throughout her trial. 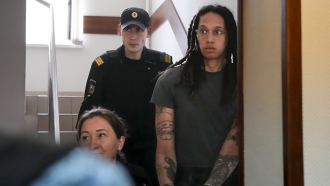 WNBA leaders continue to voice their support and remain hopeful.

"Knowing that this process is continuing to move forward, we are indeed continuing in a forward progress," Terri Jackson, executive director of the WNBA Players Association, told CNN.

The White House vows it's doing everything it can to bring wrongful detainees like Griner home. Griner's wife Cherelle said Friday that President Biden replied to a letter from Brittney in which she described fearing she would never return home from Russia.

"I believe every word that she said to him he understood, and he sees her as a person, and he has not forgotten her, which was her biggest cry in her letter," Cherelle Griner said.

"I think the power of the letter that Brittney personally wrote to the president is the reason why President Biden and Vice President Harris made that call," said Arizona Rep. Greg Stanton.

In yet another move by a U.S. official, former New Mexico Governor and Diplomat, Bill Richardson — who privately works on behalf of families of hostages and detainees — plans to visit Moscow in the coming weeks to advocate on behalf of Griner and Paul Whelan, another American detainee.

"I understand what they are doing is very challenging due to the circumstances with Russia and the United States right now. So, I want to make it very clear our next move as supporters is to make sure the admin understands they have our full support in doing anything and everything necessary to be able to bring B.G. home, as well as every other wrongfully detained American," Cherelle Griner said.

Her next court hearing is scheduled for July 14, and Griner's legal team said they expect the trial to conclude at the beginning of August.