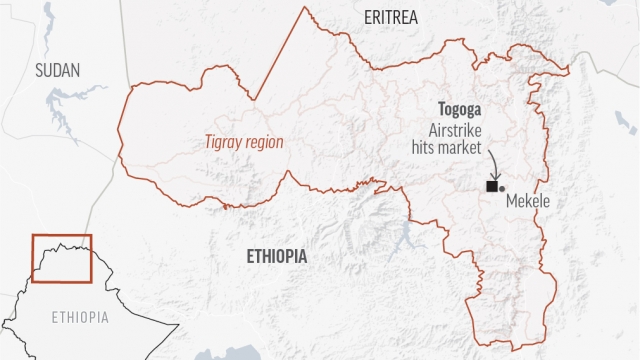 An airstrike hit a busy market in Ethiopia’s northern Tigray village of Togoga on Tuesday, according to health workers who said soldiers blocked medical teams from traveling to the scene. Dozens of people were killed, they and a former resident said, citing witnesses.

Two doctors and a nurse in Tigray's regional capital, Mekele, told The Associated Press they were unable to confirm how many people were killed, but one doctor said health workers at the scene reported "more than 80 civilian deaths." The health workers spoke on condition of anonymity for fear of retaliation.

The alleged airstrike comes amid some of the fiercest fighting in the Tigray region since the conflict began in November as Ethiopian forces supported by those from neighboring Eritrea pursue Tigray's former leaders. A military spokesman and the spokeswoman for Ethiopia’s prime minister did not immediately respond to a request for comment.

Wounded patients being treated at Mekele's Ayder hospital told health workers that a plane dropped a bomb on Togoga's marketplace. The six patients included a two-year-old child with "abdominal trauma” and a six-year-old, the nurse said. An ambulance carrying a wounded baby to Mekele, almost 37 miles away by road, was blocked for two hours and the baby died on the way, the nurse added.