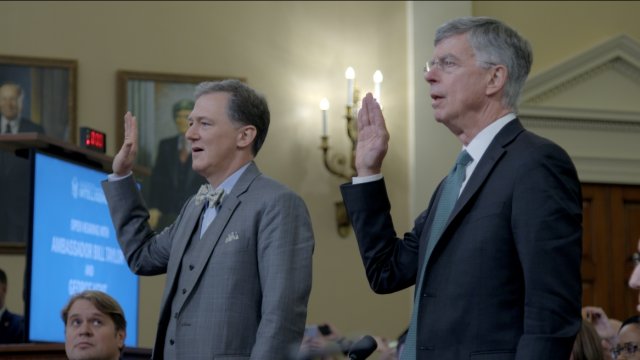 The first day of public impeachment investigations, live and in front of America. The testimony included a major new revelation. In his opening statement, former Ambassador Bill Taylor said just one day after the now-infamous call between President Trump and Ukrainian President Volodymyr Zelenskyy, a member of his staff overheard a call between President Trump and EU Ambassador Gordon Sondland where the president asked about "the investigations."

The president's personal attorney, Rudy Giuliani, was part of what Taylor and diplomat George Kent called an "irregular" channel of communications with Ukraine, pressuring the Ukrainian president to announce an investigation into former Vice President Joe Biden's son in exchange for releasing critical military aid.

"By mid-July, it was becoming clear to me that the meeting President Zelenskyy wanted was conditioned on the investigations of Burisma and alleged Ukrainian interference in the 2016 U.S. elections. It was also clear that this condition was driven by the irregular policy channel I had come to understand was guided by Mr. Giuliani," Taylor added.

Republicans, namely former U.S. Attorney and now-congressman John Ratcliffe and Rep. Jim Jordan, who was added to the Intel committee to give him a leading role in the questioning, repeatedly pressed Taylor about why he was so sure of the alleged quid pro quo.

President Trump insists he did nothing wrong and points to the fact that he sent more lethal aid to Ukraine than President Obama. He said Wednesday he hadn't been watching the hearings.