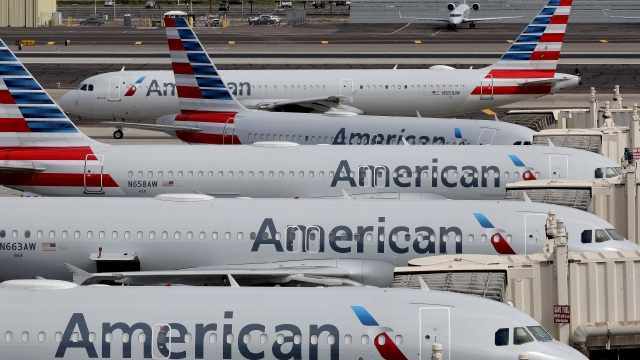 Lauren Magarino: "Newsy's Katherine Biek is going to be joining us right now because she's tracking how the lack of further government aid will impact the airline industry. Katherine, how many airline workers could lose their jobs because of this?"

Biek: "Multiple reports are saying close to 50,000 pilots, flight attendants, baggage handlers, counter agents and other personnel could be laid off starting today. That's because of he CARES Act, which was that historic $2.2 trillion coronavirus stimulus package passed by Congress back in March. It provided tens of billions of dollars in government assistance to airlines. But in exchange, airlines were not allowed to furlough their workers or cut their salaries through the end of September. But it's now October 1st, which means that government aid has expired. American Airlines and United Airlines have already announced they're moving forward with plans to start laying off more than 32,000 workers combined today. It's a move American Airlines' CEO told CNN he didn't want to take."

American Airlines CEO Doug Parker: "The last thing we want to do is furlough employees. That's why we've been fighting so hard for them to come to agreement."

Biek: "Now American and United will account for the majority of job cuts that take place this week. That's because other U.S. airlines have been able to strike deals with unions to push back furloughs. But they're not off the table completely. For instance, Delta is only delaying pilot furloughs until November 1st."

Magarino: "I just can't imagine the up and down and back and forth over what's going to be happening. You come up on this deadline and nothing for you, right? It's a really tough time now. On the flip side, I'm wondering how are travelers going to be affected?"

Biek: "Well, between these airline worker job cuts and demand for flying being so low — it's currently about 70% lower than it was a year ago — they're certainly going to be a trickle down effect that we, as travelers, are going to experience. Expect to see airlines cutting more flights and routes. Southwest Airlines has already said it's going to do less point-to-point services, which are those direct flights. So if you're a Southwest passenger, you might end up having one or possibly even two layovers before you reach your final destination. And some smaller regional airports could lose their service altogether. I'm talking cities like Dubuque, Iowa, Lauren, which American Airlines has already announced it's cutting service to next week."