With Tensions High, The US Has Regained Access To Key Turkish Air Base 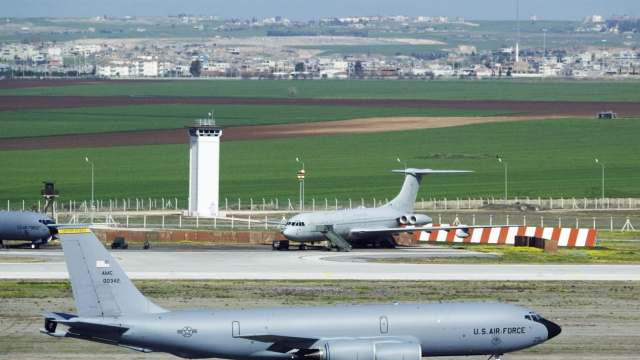 SMS
With Tensions High, The US Has Regained Access To Key Turkish Air Base
By Ryan Biek
By Ryan Biek
July 17, 2016
The Incirlik air base, a key asset in the fight against ISIS, was temporarily shut down.
SHOW TRANSCRIPT

After temporarily closing its airspace, Turkey has allowed the U.S. to resume its operations at the Incirlik air base — a key asset in the fight against ISIS.

A Turkish air base commander was arrested Sunday in connection to a failed coup on Friday. Turkey closed its airspace to all military aircraft after the attack, and for a while it was unclear when the U.S. would regain access to its portion of the Incirlik air base.

The base has been a springboard for aerial attacks against ISIS in Syria and Iraq. In May, an Air Force commander told The Washington Post Incirlik alone carried out one-third of the fueling operations for the war against ISIS in those two countries.

The power was even cut to the base, though a visiting scholar told The Wall Street Journal that decision appeared to have been made outside the chain of command.

Tensions between the U.S. and Turkey are still high after at least one government official insinuated the U.S. was involved in the coup attempt. Turkey's president has more openly accused Muslim cleric Fethullah Gülen of planning the attack.

Gülen is a Turkish national who's lived in Pennsylvania under a self-imposed exile for almost two decades. Turkey has demanded that the U.S. extradite him, which the U.S. has refused to do without evidence supporting the Turkish officials' claim.

Secretary of State John Kerry claimed Sunday that in spite of the recent upsurge in terrorist attacks in several international cities, ISIS is actually "on the run" in both Iraq and Syria.