Senators Use Magnitsky Act To Trigger Probe Into Missing Journalist 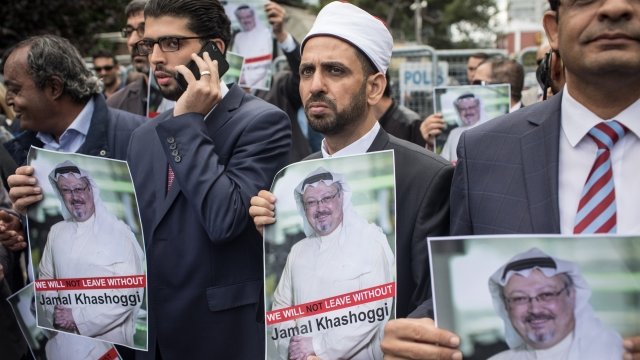 By Stephanie Liebergen
October 11, 2018
A bipartisan group of senators sent a letter to President Trump asking him to look into the disappearance of Saudi journalist Jamal Khashoggi.
SHOW TRANSCRIPT

A bipartisan group of senators triggered a U.S. investigation into a missing Saudi journalist.

Using the Magnitsky Act, 22 senators signed a letter to President Donald Trump calling for an investigation into Jamal Khashoggi's disappearance. He was a former Saudi government adviser who had become increasingly critical of Saudi Arabia in his writing.

Khashoggi was last seen entering the Saudi consulate in Istanbul on Oct. 2. The suspicion is he was killed inside the consulate.

"I've never been more disturbed than I am right now. If this did in fact happen, if this man was murdered in the Saudi Consulate in Istanbul, that would cross every line of normality in the international community. If it did happen, there would be hell to pay," Sen. Lindsey Graham said.

"I'm gravely concerned that alleged behavior by the Saudis, if true, are a direct contradiction to our most basic commitment to a free press and to rule of law," Sen. Chris Coons said.

The Magnitsky Act allows the U.S. to sanction foreign nationals who kill, torture or grossly violate the human rights of someone who's exercising their freedom of expression.

The act was passed in 2012 and is named after a Russian dissident who was beaten to death in a Russian jail. At the end of 2017, 49 people were sanctioned under the Magnitsky Act.

The law gives the White House 120 days to investigate and decide whether sanctions are warranted.