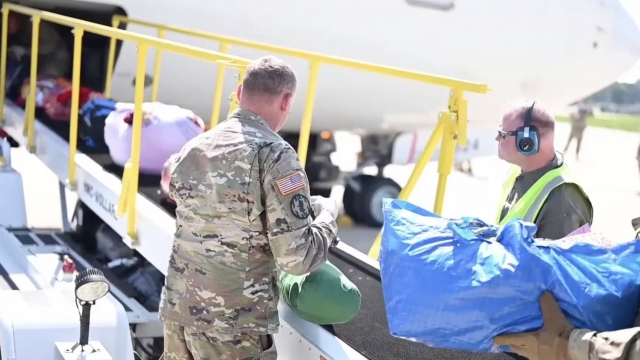 As Afghan refugees begin to arrive stateside, residents in the small town of Tomah, Wisconsin, say they are ready to welcome them into their community midway between Milwaukee and Minneapolis.

"I have an apartment that I'm going to offer if they need housing in Tomah, but really to everybody that's out there, I think we just rally as a community," Jane Donaldson, a Tomah business owner said.

Tomah sits roughly a dozen miles east of Fort McCoy, one of a handful of U.S. military bases the Department of Defense says will temporarily house Afghan refugees.

"We certainly encourage Americans to welcome them as well when they relocate from our military bases into the American society where we are," John Kirby, Pentagon Press Secretary said.

Local news outlets report that roughly 1,000 refugees have arrived and that up to 10,000 more could come in the weeks ahead. In addition, 1,000 service members are reportedly on-site at the base to assist the refugees.

On social media, Fort McCoy has released photos showing how the base has been prepared for its new tenants. Back in Tomah, the school district's superintendent Mike Hanson says his team is preparing for any new students that may arrive in their classrooms.

"While we don't know any numbers or how many, we're in that communication phase, so we're staying in touch with one another on that,"  Hanson said.

This isn't the first time Fort McCoy has temporarily housed refugees. During the summer of 1980, the fort became home to roughly 14,000 refugees who had fled Cuba to escape life under Fidel Castro.

Hanson says his family housed one of these refugee families from Cuba and that he feels ready help those coming from Afghanistan.

"I feel a personal connection on that level with my family history and the duty we have," Hanson said.

"I think it's cool like they get the opportunity to come to like a bigger high school and get the chance to just like have a normal education in like small town Wisconsin, it's kind of cool," Makenzie Kohn, a student at Tomah High School said.

But some lawmakers have expressed security concerns.

"I share that heartfelt desire to bring people out that were our allies that are in grave danger and bring them here safely. At the same time, because this wasn't preplanned and this wasn't organized, that we have such chaos now. We have to understand there is a danger to this country and we need to recognize that. So we have to take our time. We can't rush to the process. We can't be playing a numbers game," Senator Ron Johnson said.

In a letter to Governor Tony Evers, state senator Patrick Testin says Wisconsin residents need more answers regarding the number of refugees arriving, the condition of their health and how potential security concerns would be addressed.

"When I asked how many people have, do you know whether everybody has an ID who's coming to Fort McCoy yet? They couldn't answer that question again. That's how chaotic this is. This is how unplanned and how unorganized this was from the top," Johnson said.

Still, local business people have organized what they call "a think tank" to come up with ways to aid the refugees.

"This community is so generous and so thoughtful and caring," Donaldson said.