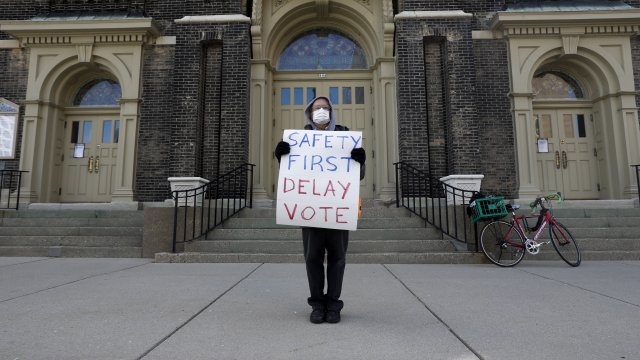 The Wisconsin Supreme Court on Monday blocked an effort by the governor to delay that state's primary.

"I've been advised by public health experts at the Department of Health Services that despite the heroic efforts of our election officials, poll workers and National Guards troop, there is not a sufficiently safe way to administer in-person voting tomorrow," Evers said Monday.

More than a dozen states have so far postponed their primaries or switched to all mail-in voting. Wisconsin is an exception to the trend, conducting an election amid a stay-at-home order.

The Wisconsin Elections Commission has warned that 60% of the state's municipalities reported a shortage of poll workers.

"Election judges, poll workers, have been sending very clear signals they don't plan to show up," said David Hawkings, editor-in-chief of The Fulcrum. "Of course, we all know poll workers in this country tend to skew old. Something like three out of every five poll workers is older than 62. That's absolutely the case in Wisconsin."

Wisconsin Republicans argued the governor could not move the election on his own. Evers initially said the same — but on Monday said he took executive action after the pandemic worsened in the state.

"Deaths have increased as well as the number of people that are determined to be positive to COVID-19," Evers said. "In addition, we've had significant retraction as far as the number of polling places that are open. Clearly, anyone who can do basic math understands that if you have fewer places to serve voters that you will have larger numbers at those sites."

With 84 delegates at stake, Wisconsin is the next battle of the Democratic presidential primary. Polls show Joe Biden with a sizable lead over rival Bernie Sanders.

Sanders has called on Wisconsin to delay the vote, while Biden said he deferred to state leaders.