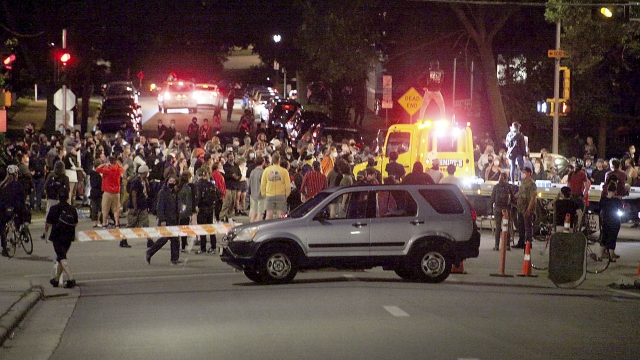 Evers said in a statement Wednesday the National Guard would help make "sure people can exercise their First Amendment rights while ensuring the safety of members of the public and state buildings and infrastructure."

The unrest in Madison started Tuesday after law enforcement arrested a Black man. The Madison Police Department released video showing the man walking around a restaurant while holding a bat and talking into a megaphone. At one point, the video shows the the man calling another man a racist and then talking about God. A separate video from the department shows officers carrying the man to a police car.

Protesters demanded police release the man and marched to the Wisconsin State Capitol. The Milwaukee Journal Sentinel reports State Sen. Tim Carpenter says he had stopped to take a picture of protesters when he was punched multiple times and kicked in the head.

Later that day, protesters removed two statues outside the Capitol building. The statue of anti-slavery activist Col. Hans Christian Heg was decapitated and thrown into a lake. Protesters also smashed windows and lights at the Capitol.

The Associated Press reports one protester said the statues showed Wisconsin as "racially progressive," but they said, slavery has continued with the incarceration of Black people.

Evers told WTMJ-AM: "If your goal was to advance social justice and policing reforms in the state of Wisconsin and making sure systemic racism is a thing of the past, you failed."

Additional reporting by Scott Bauer and Todd Richmond of the Associated Press.