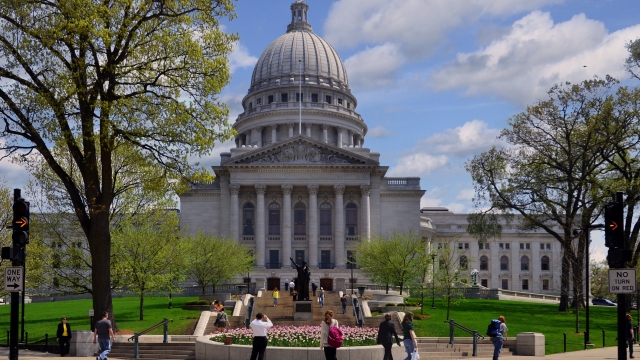 Wisconsin Gov. Tony Evers included a number of proposed changes in his budget legislation, and Republicans in the state criticized him by highlighting one provision about university tuition rates.

A press release from GOP legislators says: "College applicants in the country illegally would pay substantially reduced in-state tuition if they've attended a Wisconsin high school and been 'present' in the state for three years. In contrast, veterans in the state must prove not only residency of five years, but prove military service and maintain their grades in order to receive tuition benefits."

The same comparison made its way onto Twitter, where the state Assembly's majority leader implied that Evers wants to give immigrants more tuition help than veterans.

So, is that a fair explanation of the governor's budget proposal? Not really. For starters, the GOP statements are conflating two separate programs. And one program is already law; the other is just a proposal.

Let's start with the program already on the books: veterans tuition remission. Many veterans get their tuition paid for by the federal GI Bill. Once those benefits are exhausted, veterans can get up to eight semesters of tuition and fees covered by the state. To qualify, veterans have to have lived in Wisconsin when they entered the military or live in the state for five years before enrolling in college. Then, while in school, they need to maintain a 2.0 GPA or higher.

That program completely pays for veterans' higher education. The governor's office isn't proposing a similar one for undocumented immigrants — he just wants to give them a break on the cost of tuition.

Evers' budget bill proposes granting in-state tuition rates to undocumented immigrants who graduate or get a GED from a Wisconsin high school, have lived continuously in Wisconsin for at least three years, and promise to apply for permanent residency as soon as possible. In announcing his proposal, Evers said he wants these students to "be treated like any other kid from Wisconsin."

For reference, in-state tuition at the University of Wisconsin-Madison, the state's biggest university, is currently about $10,500. Out-of-state tuition is just under $37,000. So we're not talking about pocket change here.

So the Wisconsin GOP's claim that Evers is putting undocumented immigrants before veterans is flawed. The two tuition benefits programs are very different and don't make for a fair apples-to-apples comparison.