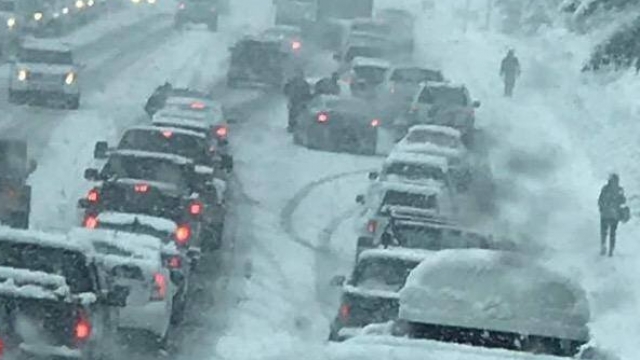 The Pacific Northwest is being hit by a major snowstorm, and some areas haven't seen this much snow in 70 years, according to the National Weather Service.

The winter storm arrived Friday morning, pummeling Washington's Olympic Peninsula with heavy snow for hours. By Saturday morning, the peninsula had accumulated over a foot of snow.

On Saturday evening, the National Weather Service said the Seattle area received up to 10.6 inches of snow, almost breaking the 1945 record of 13.1 inches. To put that in perspective, the city's yearly average is less than 7 inches.

Washington's governor declared a state of emergency ahead of the storm, saying, "Everyone in our state needs to focus on preparing for the snow and staying safe." Seattle's police department tweeted that it was sending vans to take people who are homeless to shelters.

The entire region is feeling the effects of the winter storm. CBS News said around 50,000 people lost power and, according to AccuWeather, travel could be "difficult to impossible" throughout the affected area. Hundreds of flights in and out of the region have been canceled.