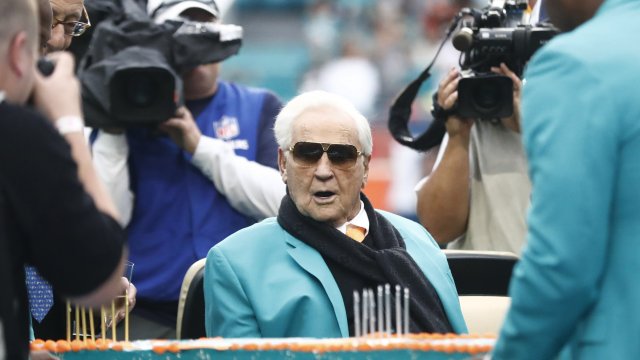 SMS
Winningest Coach In NFL History, Don Shula, Dies At 90
By Nathan Byrne
By Nathan Byrne
May 4, 2020
Shula led the Dolphins to the only perfect season in NFL history.
SHOW TRANSCRIPT

The coach with more wins than any other in the NFL has died. Former Miami Dolphins head coach Don Shula was 90 years old.

The team confirmed the news in a statement Monday, calling Shula "the patriarch of the Miami Dolphins for 50 years."

In 1972, Shula led the Dolphins to the only perfect season in NFL history, when the team followed a 14-0 regular season with an undefeated run to a Super Bowl win, finishing at 17-0.

Over 33 seasons, Shula won 347 total games including postseason play. His teams made the playoffs 20 times. He made it into the Pro Football Hall of Fame in 1997, just two years after his retirement.

Before coaching the Dolphins, Shula led the Indianapolis Colts to seven straight winning seasons. He played football in college at John Carroll University and went on to play professionally for the Cleveland Browns, Baltimore Colts and the franchise in Washington.

He is survived by his wife and five children.