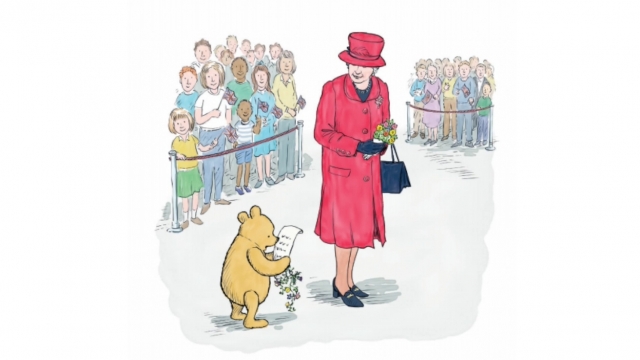 Winnie-the-Pooh is leaving the Hundred Acre Wood in Disney's newest tale and is heading to London to celebrate a famous royal's 90th birthday.

Turns out the honey-loving bear and Queen Elizabeth have something in common — they were both born in 1926, the year the first Winnie-the-Pooh book was published.

Which is how the queen and her grandson Prince George came to be included in Disney's "Winnie-the-Pooh and the Royal Birthday."

In the story, Pooh, Piglet, Eeyore and Christopher Robin head to Buckingham Palace to present Queen Elizabeth with a poem — or a hum as Pooh calls it — for her special day.

Now unlike the Queen, Prince George isn't referred to by his title in the story.

Instead, the author describes the royal toddler as "much younger than Christopher Robin and almost as bouncy as Tigger."

It's undoubtedly George, though — illustrator Mark Burgess even chose to draw the character in the exact outfit the prince wore to a polo match last year.

This is the first time Queen Elizabeth has been featured in a Winnie-the-Pooh story, but there's actually a bit of history between the two.

Creator A.A. Milne dedicated his book "Teddy Bear and the Other Songs from When We Were Very Young" to a then-princess Elizabeth when she was born. The story featured Pooh.

While Queen Elizabeth doesn't officially endorse the new Disney story, The Telegraph reported she "was happy for the project to go ahead."

This video includes clips from Disney and The British Monarchy and images from Getty Images. Music provided courtesy of APM Music.