Wimbledon Cracks Down On All-White Clothing Rule For Players 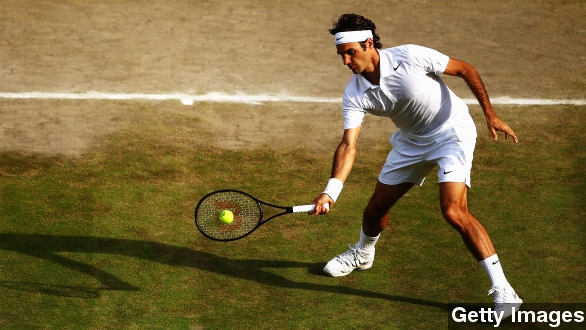 SMS
Wimbledon Cracks Down On All-White Clothing Rule For Players

By Briana Koeneman
July 5, 2014
Wearing all-white clothing at Wimbledon has been a rule for decades. Players have somewhat ignored it for years, but officials are now cracking down.
SHOW TRANSCRIPT

Wimbledon has long required players to wear almost entirely white outfits during the tournament. And players have somewhat bent that rule for decades. (Via Getty Images)

But this year, officials are cracking down on the dress code and expanding it — and not everyone is happy about it.

The All England Club introduced a new 10-part set of rules for the tournament's dress code on Wimbledon's website. Among the additions — "White does not include off-white or cream," and clothing can only contain "a single trim of color no wider than one centimeter."

Even players' unmentionables need to comply. The rules state, "Any undergarments that either are or can be visible during play (including due to perspiration) must also be completely white except for a single trim of colour no wider than one [centimeter]." (Via Getty Images)

USA Today quotes All England Club chief executive Richard Lewis on his clarification of the rule. "We felt the time was right to make accessories such as undergarments, headbands and wristbands consistent with the policy we were applying to the shirts, shorts and socks."

One of the tipping points for the change might have come last year, when seven-time Wimbledon champ Roger Federer got some heat for wearing shoes with orange soles during a match.

He told reporters he thinks this year's clothing crackdown is too strict. (Via Getty Images)

"We’re all white. White, white, full-on white. But I respect. I understand, you know. Maybe one day they’ll loosen up the grip again a bit, but that’s the time we go through right now." ​(Via ESPN)

Though the tougher restrictions are new, tennis whites are far from a new concept.

The all-white tennis clothing trend started all the way back in the late 1800s. Players started wearing white because it hid any obvious signs of perspiration better than other colors. (Via U.S. Library of Congress)

As The Atlantic points out, around this time, the wealthy in the U.S. and England started wearing "summer white" as an outward symbol of the luxurious items they could afford. Wearing white was expensive back then, and if you wore it, it was a symbol of high status.

And because tennis had long been regarded as a sport for the rich, the rich wore white to play tennis. In 1890, Wimbledon decided to make white for tennis a rule. (Via U.S. Library of Congress)

The New York Times notes the all-white clothing tradition stayed strong until 1974, when fashion designer and former player Ted Tinling sewed light blue and pink cloth onto the hems of dresses made for another player, Joy Gannon.

The rebellious trend obviously caught on from there, and players started to see just how far they could bend the rules.

One of the most notorious offenders? Serena Williams. She's well-known for her splashes of bright colors — even her undergarments are often colorful. (Via Getty Images)

We're guessing Serena isn't thrilled with the all-white clothing crackdown. But her sister Venus told reporters she thinks it's a nice change because "everyone glows in white."