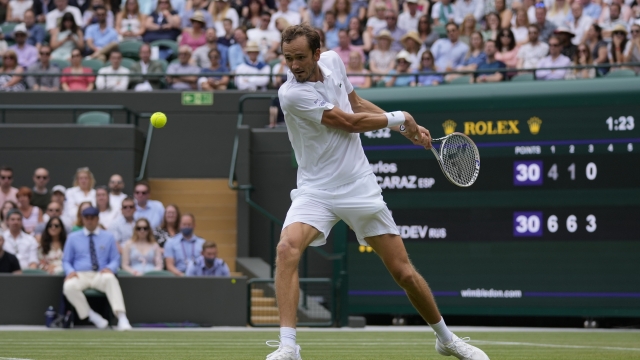 Tennis players from Russia and Belarus will not be allowed to play at Wimbledon this year because of the war in Ukraine, the All England Club announced Wednesday.

Among the prominent men's players affected by the ban are reigning U.S. Open champion Daniil Medvedev, who recently reached No. 1 in the ATP rankings and is currently No. 2, and No. 8 Andrey Rublev. The women's players affected include No. 4 Aryna Sabalenka, who was a Wimbledon semifinalist last year; Victoria Azarenka, a former No. 1 who has won the Australian Open twice; and Anastasia Pavlyuchenkova, the French Open runner-up last year.

Medvedev, Rublev and Pavlyuchenkova are from Russia; Sabalenka and Azarenka are from Belarus.

Statement regarding Russian and Belarusian individuals at The Championships 2022.

Wimbledon begins on June 27. The All England Club confirmed in March that it was having discussions with the British government about whether Russians should be able to play in the grass-court Grand Slam tournament.

“It is our responsibility to play our part in the widespread efforts ... to limit Russia’s global influence through the strongest means possible,” the All England Club said in a statement first posted on Twitter. “In the circumstances of such unjustified and unprecedented military aggression, it would be unacceptable for the Russian regime to derive any benefits from the involvement of Russian or Belarusian players with The Championships.”

Russian athletes have been prevented from competing in many sports following their country’s invasion of Ukraine. Belarus has aided Russia in the war.

Wednesday’s move signals the first time a tennis tournament has told players from Russia and Belarus they are not welcome — and the ATP was quick to criticize the All England Club for what the men's tennis tour called a “unilateral decision” and “unfair.”

“Our sport is proud to operate on the fundamental principles of merit and fairness, where players compete as individuals to earn their place in tournaments,” the ATP said in a statement, adding that the decision “has the potential to set a damaging precedent for the game.”

The French Open, which starts on May 22, will be the first Grand Slam tournament held since Russia invaded Ukraine in February and is expected to permit Russian and Belarussian players to compete — just as so-called “neutral” athletes who may not represent their countries.

The U.S. Tennis Association, which runs the U.S. Open, said Wednesday it has not made a decision about whether players from Russia and Belarus can compete at the year's last Grand Slam tournament, which begins on Aug. 29.

The All England Club said that if “circumstances change materially between now and June,” it would “respond accordingly.”