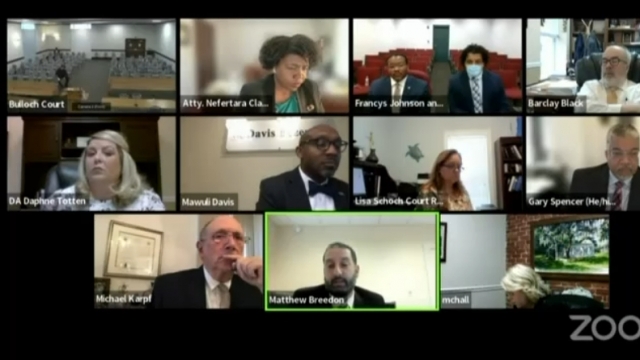 Self defense arguments are a common thread among recent high-profile criminal cases, like those of Kyle Rittenhouse and the men who killed Ahmaud Arbery. It's a factor in another case in Georgia, a stand your ground state.

William Marcus Wilson is accused of murder for the death Haley Hutcheson, 17.

Wilson's legal team argues Wilson, who is biracial, feared for his life and the safety of his girlfriend in his vehicle when a truck Hutcheson was a passenger in with a group of teens allegedly launch racist remarks and tried to run him off the road.

The people in the truck denied driving aggressively or making antagonistic statements, according to testimony in court.

"They have to prove that Marc Wilson was in reasonable fear of receiving bodily injury or even death, and that he acted in that, reasonably, in that fear that he was about to be harmed," said Lawrence Zimmerman, a criminal defense attorney and the past president of the Georgia Association of Criminal Defense Lawyers.

It's another self defense argument in a string of high profile cases across the country.

In many states, self defense expands to the right to stand your ground, including in public locations. Georgia's law says there's not a duty to retreat.

"It extends the right to a defendant to cut off prosecution with really just 50.1 percent of the evidence on your side and without a jury having an opportunity to determine the reasonableness of your actions," said Jeffrey Swartz, a professor of law at WMU-Cooley Law School.

Georgia is one of at least two dozen states where self-defense expands to the right to stand your ground.

John Roman is a senior fellow with NORC at the University of Chicago. We asked him about the factor race plays in these laws.

"Race plays a huge role in self defense claims generally. A White shooter is much more likely to be found to be acting in self defense in general than a Black shooter. When you add in stand your ground laws, that likelihood — that racial difference, that racial disparity — increases dramatically," said Roman.

It's a concern for the Southern Center for Human Rights.

"We do have concerns that Marc's race will play into whether he gets a fair opportunity to argue the stand your ground immunity motion," said Tiffany Roberts, the organization's public policy director.

In Wilson's case, the defense is seeking immunity from prosecution under Georgia's self defense laws.

"If the prosecutors want to say he should have retreated or he should have not been able to, that's a question for the legislature to take up and it's one we are interested in. But for what is currently in law right now, Marc had no duty to retreat. He had every right to defend himself using violent or lethal force just like any other person in this state," said James Woodall, a policy associate at the Southern Center for Human Rights, and the former state president for the Georgia NAACP.

An immunity hearing was held last year, but before a judge issued a ruling the defense filed a motion to recuse.

The defense questions the judge's impartiality and wants him disqualified from the case. A hearing was held Tuesday, giving both the defense and state an opportunity lay out their arguments on the issue.

"This is a court that took steps and showed objective actions that a reasonable person would say, 'well, I don't believe or I'm questioning whether or not that judge is impartial or not,'" said Gary Spencer, an attorney for the defense, during the hearing.

Spencer gave several examples to explain their reasoning. He took issue in the length of time to receive a ruling on a motion to reconsider Wilson's bond (which was previously denied); what he alleges was a difference in treatment between a state's witness and a witness for the defense during testimony; what he alleges was improper communication ;and finally, disputes the handling of a notebook containing emails from Wilson, which previously led to defense attorney Francys Johnson being held in contempt.

The state disagreed with the examples given and beyond that, said it's not a basis for recusal.

"What the court did not hear is any evidence, any testimony any timely filed affidavits dealing with a systemic pattern of prejudicial conduct to anyone similar in situation to Mr. Johnson," Matthew Breedon, an attorney for the state, said during court.

The decision of the court whether the judge can remain on the case, impacts who presides over Wilson's case moving forward.

"Obviously the lawyers want a judge they believe is not biased against them so I think they're hoping the judge who's sitting to hear the motion removes the judge," said Zimmerman. "It would be big for the defense if this judge is removed."