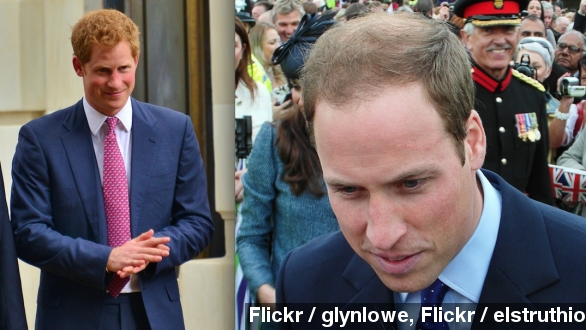 By Lauren Zima
May 2, 2014
The princes have been met with a frenzy of fans in Tennessee, where they'll see sites and attend a posh wedding.
SHOW TRANSCRIPT

Prince Harry is rebounding from his breakup with Cressida Bonas with a boys' trip.

Harry and brother Prince William arrived in Memphis Thursday for the wedding of their longtime friend Guy Pelly. WREG reports they started with a dinner at Rendezvous, a famous Memphis BBQ spot.

The pair's reported schedule includes attending the rehearsal dinner Friday night and the wedding Saturday. Pelly is marrying Elizabeth Wilson, heiress to the Holiday Inn fortune. CBS has the inside track on the activities.

"A visit to Graceland. An outdoor ceremony is planned at the upscale Memphis Hunt & Polo Club. Other details have been hard to come by."

"This is not a state visit. This is a wedding."

Pelly had quite the history with the brothers — he was reportedly present during Harry's infamous trip to Las Vegas in 2012. (Via Us Weekly)

Harry just broke up with his girlfriend of two years, Bonas, and People reports the split was kind of a surprise. So, some are speculating he might have another wild weekend.

That might not be hard to come by. As WPTY anchors easily saw, the women of Memphis are pretty excited to see Harry in particular.

"Really? It was probably some single woman out there looking at him."

Kate Middleton and baby son Prince George did not make this trip, reportedly to avoid causing an international frenzy. But it seems there's at least a female frenzy going on.